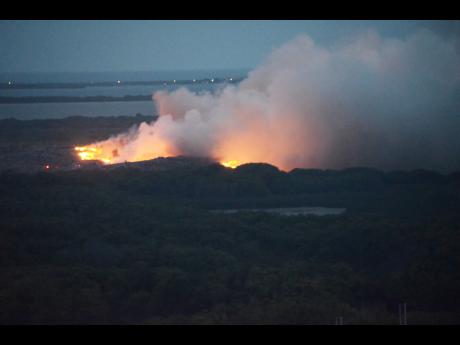 Shorn Hector photo Residents as far as away as Plantation Heights could see the Riverton landfill on fire on Sunday afternoon.

Opposition Shadow Minister of Land and the Environment, Senator Sophia Frazer-Binns said that the declaration by the government in March that the Riverton dump would be a zone of special operation (ZOSO) was a complete deception.

This comes as the most recent fire at the landfill has caused much of the Corporate Area and sections of Portmore to be covered with unhealthy smoke and soot.

“The government needs to say what has become of the Zone of Special Operation that was declared on the Riverton Landfill in March. Since the declaration, to date, nothing has been done and the problem at Riverton dump continues to affect hundreds of citizens living in the path of the sometimes-noxious fumes,” said Frazer-Binns in a release.

The PNP is also calling on the Office of the Public Defender to take immediate action to offer advice and protect to the residents from the "recurring public hazard".

The release said: "The government must take steps to immediately mobilise adequate financial support, technical expertise, and equipment; and the necessary oversight to effectively address the prevalence of this unwelcome hazard which has occurred too often and costing too much on the public purse."

In March, Minister with Responsibility for the  Environment Daryl Vaz vowed to introduce a ZOSO-type approach to deal with those involved in the illicit burning of tyres which caused the fires at that time.