Four accidents in Hanover on Tuesday 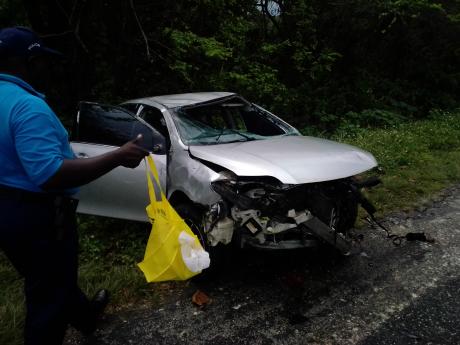 One of the Toyota motor cars which crashed in Hanover on Tuesday.


The Hanover Traffic police were kept busy following the accidents which all occurred under wet and slippery conditions.

The first incident occurred along a section of the Point Hill main road about 2 p.m., involving a silver Toyota Corolla motor car.

Reports are that the driver was heading from Montego Bay towards Hopewell, when he lost control of the vehicle which skidded and crashed into the guard rails.

The driver escaped with minor injuries, but the vehicle, which was extensively damaged, caused a major oil spill, and resulted in traffic coming to a halt while firemen washed the substance from the roadway.

Minutes later, the driver of another Toyota Corolla motor car ran off the roadway along a section of the Ramble main road. Two occupants sustained injuries.

As showers continued to pour down in the parish, a Honda Stream motor car, which was travelling from Lucea to Green Island, also crashed; the driver along with three passengers received injuries.

Then about 4 p.m., the driver of a station wagon, which was transporting passengers, lost control of the vehicle while travelling along a section of the Sandy Bay main road, in the vicinity of the Tryall housing scheme. The vehicle crashed into bushes off the side of the roadway.

Hanover has recorded two fatal motor vehicle accidents since the start of 2020, and the Hanover police say they are again warning motorists to cease from speeding, and to proceed with caution when travelling in wet conditions.