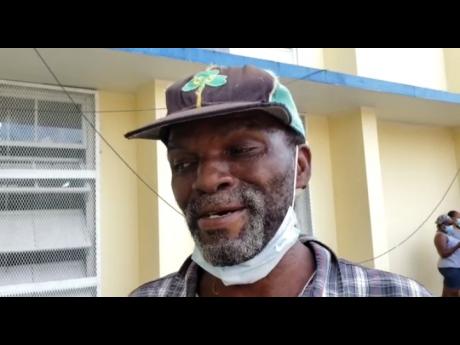 When Earl Palmer got out of his bed on Monday morning, the only thing that was on his mind was to locate Winshae Barrett.

It was Palmer's birthday but like hundreds of residents in Bath, St Thomas, he was not in a celebratory mood. Instead, all that occupied his mind was finding the 13-year-old Barrett, who was snatched from her home in Bath, St Thomas on Saturday.

Palmer, also called Honey, said that his daughter got him a birthday present but he told her that while he appreciated it, he as going to "look the better birthday".

He was determined that he was going to find Winshae.

The 52-year-old said he drank some tea and left his house to meet up with other community members who have been combing the bushes in search of Barrett.

Palmer said that the search party detected fresh tracks, which they surmised to have been left by Davian Bryan, the suspect in the abduction. The men followed the  tracks to a point  and then split the their team into two groups, one heading east and the other west. One of the teams found Barrett, weak but alive.

Palmer was ecstatic. "Me give thanks. Me know me wouda get me birthday enuh Winshae, and yuh give it to me daughter. Nuff love."

The teen was found this morning in a wooded section of Spring Bank, a community some three miles from Bath.

Police believe that she was abducted by Bryan, 32, the same man who is thought to be responsible for the abduction of nine-year-old Phylisa Prussia, also of Bath.

Barrett was abducted shortly after Prussia was found.

Soldiers and police are currently on the hunt for Bryan.