We really owe jackass an apology 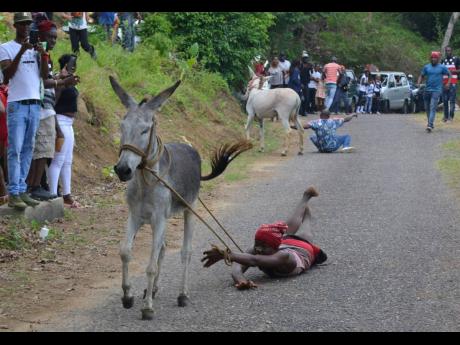 Owayne King fell from his mount at the annual donkey race at Top Hill, St catherine on Thursday, August 1. Miss Kitty says jackass is owed an apology for not taking him seriously when he says the worl’ nuh level. 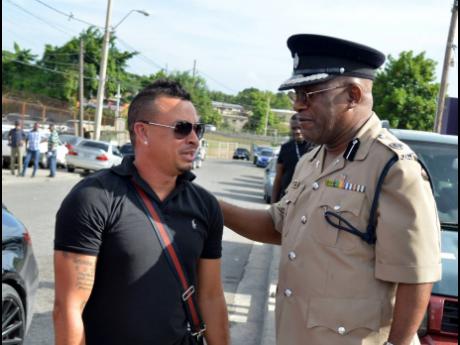 Bishop Dr Gary Welsh, assistant commissioner of police and head of the community safety and security branch, speaks with Dennis Dietrih, a man who admitted to careless driving, but was given a slap on the wrist.
1
2

W aah gwaan mi nice clean readers?! Mi hope unnu alright and in good health. I know many of you are in the heights of preparing for back to school as di pickney dem free paper soon bun. Mi hope all the parents dem pitch in with getting the children ready for the new school year because a child should get a good and solid education. A proper education is the surest asset to give them a fighting chance of survival in this brutal world.

Speaking of chance, it look like seh is only when yuh come from a certain strata of society, have a lighter skin complexion, straight nose, Indian or curly hair, and drive a Benz AMG, yuh can get a chance in Jamaica. We really owe jackass an apology because him seh the world no level, and it was proven to be so yet again.

Videos surfaced last week of a driver of a Mercedes Benz motor vehicle executing some dangerous manoeuvres with his vehicle in the Dunrobin area of St Andrew.

Di driver never even get the proverbial “slap on the wrist” him get more like a “pat on the back”! The police’s rationale for their behaviour is that sometimes one has to use a “teaching” moment to get across a message to the wider society. The majority of Jamaicans believe that was a teaching moment gone wrong!

If it was a ghetto yout or taxi man who a drive a ‘regular car’ would he be called to a roadside press conference and given the same treatment?! That incident set bad precedent and reinforced the belief that the law only seeks to oppress the poor while turning a blind eye to the atrocities of the privileged.

At a time when it is literally anarchy pan de road, led by taxi and bus drivers with many citizens following suit, one would have thought that the police would be cracking down to send some string ‘teaching’ to offenders. After a show like dat, it also makes the job for police officers more difficult because how can a police now be firm with a man who drive a ‘Pro Box’ when him break the law after the Benz man get weh free?!

This was not an occasion fi smile up and fren up wid someone breaking the law but to send a proper signal to others, especially would-be offenders. As they say, the road to hell is paved with good intentions, and we deh well pan de way! Jesus, please tek di wheel!