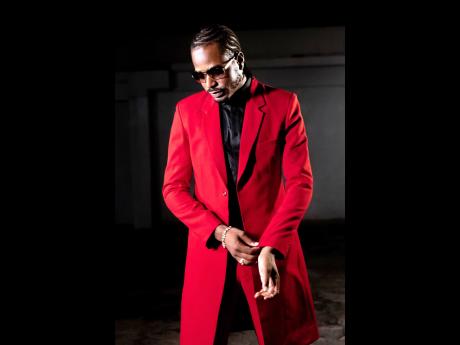 Dancehall artiste Govana released his debut album, 'Humans and Monster Are Not The Same (H.A.M. A.N.T.S)', last Friday, and although he admits the body of work may not have been what his fans are accustomed to, the ' Up Front' deejay is blown away by the responses to the project.

"This is a different approach, a more cultural approach. We have two things on it for the streets; Ole' and Sleep, the bonus track, but even when yuh listen dem deh, dem nuh sound so gritty and grimy as weh yuh would expect from a Govana, or a Diablo in his earlier stages. This is more of the calmer side of me," he said.

Govana revealed the album was inspired by his late grandmother. In an Instagram post, he shared that his grandmother had expressed an interest in him producing some material that she and her church sisters could listen. Govana said that he is saddened by the fact that she wasn't able to witness him deliver on that request.

Govana revealed that he in putting together H.A.M. A.N.T.S, he was "kind of tentative about a lot of things at first, because a lot of people don't know me for this calm side".

"I'm more known for the 'gyallis' type a song dem and the hardcore street thing dem, so fi do like a completely clean album, I was wondering how people a go receive it," he added.

The Spanish Town native said that he is loving the reaction he has been getting from fans.

"Me never get so much traction on any of my social media pages about nothing weh me release before this. This is for a different audience, this is not for my core fans, this is for a more mature crowd, but dem (core fans) accept it wid open arms, so me feel good within mi self," he said.

"The album is out now and the people love it. Really and truly, dem receive it well and me feel good inna myself about that."

While the idea for the album was inspired by his grandmother, the title of the project came from his son.

"I had like five or six songs off it and me did a play it for one of my elders weh me respect when it comes on to music. While playing the tracks to him, my son was there. After I finished playing the tracks he (the elder) said to me, 'Yow yute, you are a musical monster innu, yuh nuh normal'," Govana told THE STAR.

"When me leave from me bredren yard now and a go home, my son said, 'Daddy, why did your friend just call you a monster?' I said to him we were talking about music. And he said, 'Yea daddy, but humans and monsters are not the same', and so that's where the whole title came from. When he said it, me a say to myself, dat sound a way, and it hit me so me just run wid it."

Govana said that H.A.M. A.N.T. S has been in the works for about four years.

"I'm a yute weh grow up on bodies of work. Aidonia's mixtape turned me into a real full-fledged artiste. Me did a do music before in school and a write songs and thing, but a when me hear him mixtape me tun artiste," he said.

"I grew up listening to Sizzla albums and Buju Banton, so me always love and respect albums. Me being in the game now, and more of an artiste than a fan now, me affi give back weh me did enjoy," Govana said.