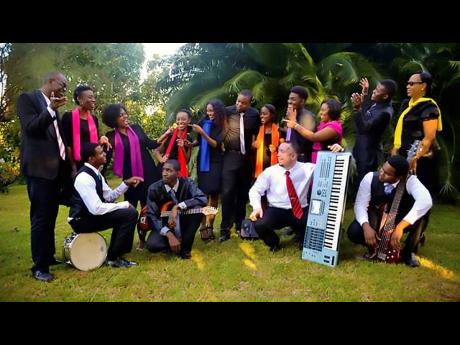 Members of the Anointed Musicianz and Singers group.

Pairing a love of music and devotion to the gospel, the Anointed Musicianz and Singers group is a collective to admire.

Throughout the group's nine-years lifetime, the members have volunteered their time and talent to gospel music with award-winning results.

But they are not in it for the accolades or money. They do what they do for the love, and only ask for gas money in return.

In total, there are about 25 members, but only 20 are currently active. With nine vocalists, the rest play various instruments.

"It was just a band first. We were responsible for backing Genesis (the show). It was after that the group was formed," Opal Rhoe, one of the group's singers (and public relations representative) told THE WEEKEND STAR.

That was back in 2011, at the first staging of Genesis in Mandeville. Since then, the group expanded - big enough to share stages with the top local gospel acts like DJ Nicholas, Kevin Downswell (Realignment Tour), Jermaine Edwards, and Prodigal Son.

"We've been on tours in Florida. We've been there for three years. We sang at Papa San's church. That was one of our places," Rhoe said.

The group has a mixture of various denominations, including Apostolic, Pentecostal, Seventh-day and Church of God.

Managed through a WhatsApp group, the multi-denominational group convenes for rehearsals every Monday evening - a concerted effort that comes from a love of music and an unending desire to spread the gospel.

Extensive as their performance history may be, the group doesn't really get paid. Rhoe shared that in earlier years, the group only asked to get reimbursed for gas money, but these days are a little different.

"We are definitely doing it for the love. If we do charge persons for a show, it's because it involves gas. But if we charge a certain amount and there's some left over, we usually use that towards our album. We use the excess to go towards our studio time," she said.

Anointed Musicianz and Singers' album is a work in progress, for posterity. The group is not doing as many shows as usual because they are focused on booking some more studio time.

"It's gonna be our first album. We're trying to get something out there for ourselves. We've all been in it from we're really young, so with a majority of the group, everybody's getting married, or migrating. So we want to have something to show," she said.

The group has already released two original songs, and hope to release more during 2020.

But it seems they are already well on their way to establishing themselves as local gospel music mainstays.

Last year, they took home the Group of the Year award at the third annual Sterling Gospel Music Awards.

"That was exciting! It was our second nomination, so we were kinda hoping for it, but we weren't really sure that we would win. But listen! When we win, pure screaming," said Rhoe.