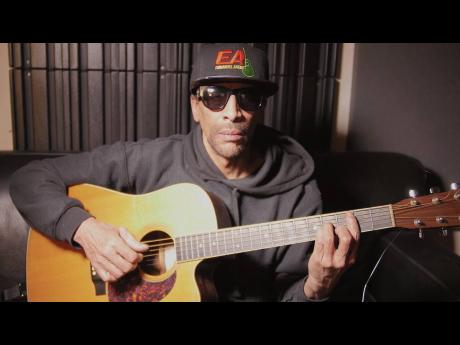 Reggae artiste Emmanuel Anebsa is all smiles as his just-released album, My Jamaica Roots, is looking to be his most commercially successful album to date.

It debuted at number two on the UK Reggae iTunes charts.

"I never got on the chart before, so this is my best album sales ever. To come out, and on the first day, and get there and peak at number two on the Top 200 album chart is quite good, with Bob at number one," he said. The album, his 40th, remained on the chart for four days.

The nine-track album features politically charged songs such as Mash Up Jamaica, Sing the Revolution and Time. He finds it very gratifying that he is able to make a political statement with this project and still get commercial sales.

"We live in the UK and grow on Jamaica culture, and we're militant inna Babylon 'cause we want to be free. Big respect to artistes like Hugh Mundell, Jacob Miller and Dennis Brown, who I grew up listening to in my father's cafe. I grow up and I see the oppression, [the] lack of opportunity created by a system designed against us. We were victims of systematic racism in the UK. I grow with that and see it is still the same; but now it is racism with a smile," he said. One of Anebsa's favourite songs on the album is Sing the Revolution, which has a theme of resisting oppression.

Anebsa is a savvy businessman who launched his own Wontstop Record in his home town of Bristol in 1998. Numbered among the 40 albums he has released is the popular St Paul's Ghetto.

"We nah stop bun Babylon. With no compromise for money or position in music, 'cause I know you can't be famous and sing the revolution," he said.