Check-Up: How do I deal with my child’s tantrums? 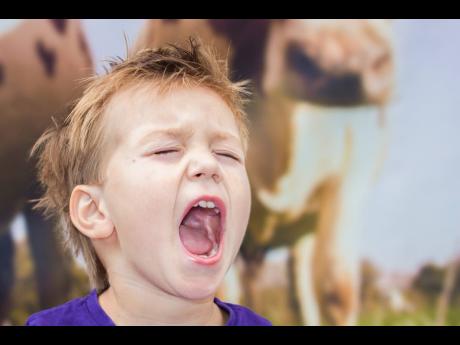 Desi contacts Check Up about her soon-to-be four-year-old daughter. The problem is that she sometimes has out-of-control moments when she screams and even vomits.

This usually happens when she wants something and can’t get it. At other times, she is quite well behaved.

A few of Desi’s friends say the child is having temper tantrums, and they even suggest ignoring her sometimes. Is this good advice?

The behaviour does sound like a temper tantrum, but this should not be assumed without first consulting your family doctor or paediatrician to examine the child.

Temper tantrums tend to occur in youngsters under age four, and are usually expressions of frustration on their part. They include a wide range of behaviours, such as screaming, kicking, vomiting and slapping.

Tantrums often begin in the second to third year of life when a child becomes more aware of the world but doesn’t yet have the language tools to properly express themselves.

Most children, given time, will learn to cope with their feelings and stop the temper tantrums eventually, more quickly with the correct encouragement from the parents!

Please don’t lose your cool when your child ‘erupts’. Losing your cool can result in poor responses such as giving the child their own way or slapping them.

Try to prevent tantrums where possible:

- Give your child some control over their lives and limit the opportunities for them to say ‘no’.

- Keep the items which the child is not allowed to play with or use out of sight at home, if possible, until the child begins to understand that everything is not theirs to play with.

- Give warnings ahead of time. For example, tell the child bedtime is approaching in advance.

- Reward your child for proper and appropriate behaviour.

- If the child acts up when in a public place, try to distract the child by changing the environment. Take the child outside for a walk or try playing a game.

- If your child wants to do something, check it out first before saying no. Maybe it’s actually an okay activity.

- Know when your child is just tired or hungry.

- Avoid situations which you know tend to result in temper tantrums.

A parent should respond to a temper tantrum differently depending on the cause. Sometimes a parent needs to provide comfort.

When a child is trying to have their own way, try to ignore them.

Stay calm and don’t spend too much time trying to explain the ‘whys’ to a three-year-old. Take the child to a safe place and put them in ‘time out’, but not for long.

Use about one minute for each year of life. If this doesn’t work, then hold the child firmly and safely for some minutes, or tell them they’ll have to stay in their room until they calm down.

If a child has a tantrum when asked to do something, then when the child calms down, they should always be asked to complete the task so that they don’t learn to use a temper tantrum to avoid unpopular tasks.

Praise your child when they gain control of their temper, but do not reward the temper tantrum by giving in. Hug them, tell them you love them, but be firm.

If the tantrums are worsening or occurring more frequently, then see your doctor. The child could be responding to negative things in their environment, there could even be some form of child abuse occurring or bullying at school, or the child might have an undetected disability. Also, see your doctor if you are feeling out of control when the child flares up.