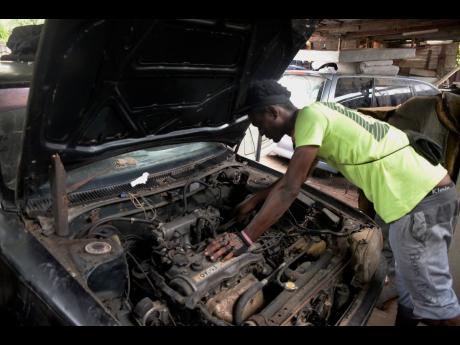 Sheldon Taylor checks out the engine of this car.

Just mention the nickname ‘Greasy Monkey’ on Whitehall Avenue, and all index fingers will point towards a garage on Victoria Courts.

The establishment that is operated by Sheldon Taylor and his father was filled with cars and several bikes, most of which were badly in need of repair.

Flashing a wide smile, Taylor said he and his father were dubbed ‘greasy monkeys’ because their hands and outfits are usually greasy and oil decorated.

“When I leave Edith Dalton James High School, mi never waan sit down. So mi father start teach mi the mechanic ting and after that mi go HEART. Mi like visual arts so mi used to design like wedding gowns and do sketches a people. But mi nah lie, me heart was always set on going back in the oil and grease ting because mi really love working on vehicles. That is how mi and mi fada get the name but it never once bother we because we are both doing what we love,” he said.

He told THE STAR that he also has training as a tattoo artiste, but his ‘first love’ always landed him back in his mechanic shop.

“On a regular week all 10 cars mi a work on, and a it mi use take care a mi family. Mi can do the bodywork part but I like to be in the engine and so on. I like to get my hands dirty. Mi nuh just limit myself to cars alone, but more time when the little youth dem bicycle want fix, dem check mi too. Mi all fix bikes and wheelchairs too. Mi love the tattoo ting too and mi all do some on my body but for some reason, mi always end up back inna mi shop,” he said.

Taylor said that sometimes persons bring vehicles that people think they can’t fix because the vehicles have many problems.

“But we always ensure that we do our best because at the end of the day, we want every customer to leave satisfied. This is why we get a lot of referrals. Nuff time the likkle youth dem come wid dem bicycle mi not even charge them because dem a kids,” he added.

The 26-year old stated that he looks towards opening another garage in other sections of St Andrew, where he can employ and teach aspiring mechanics.

“My son a just one year old now but in a few years mi woulda waan teach him the trade just like how my fada did teach mi. Mi would waan give other people job and teach other youths the trade so dem can make a little money for themselves,” he said.