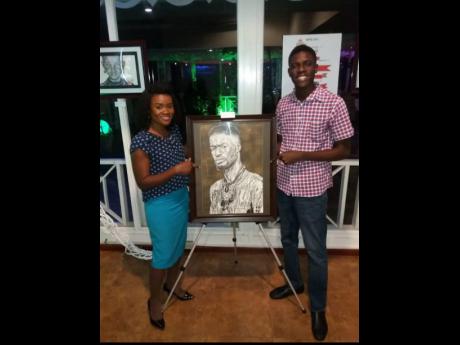 Nadine Clemetson (left) poses with one of her students. 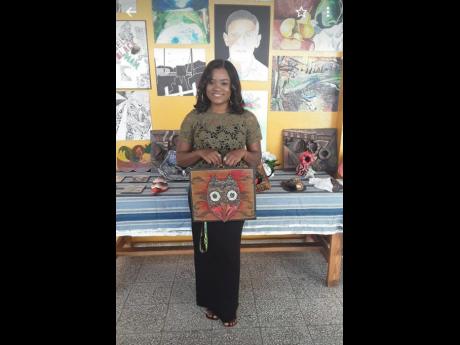 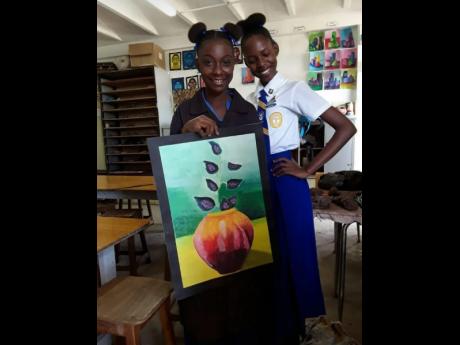 Two of Nadine Clemetson's students show off some art work.
1
2
3

Four years ago Nadine Clemetson joined the teaching staff at the Jose Marti High School in St Catherine, where she teaches art, and she has been impacting the students there since she entered the institution.

She told THE STAR that her love for visual arts came from her high school experiences.

"Visual arts really helped me academically because I was very slow, so I started drawing in grade nine, and what I realised is that it assisted me therapeutically. My teacher started to use it as a means for me to read better. So most times when I did a piece of drawing or painting, she would ask me to write what I thought about it," she said.

When she transferred from her previous high school to Jose Marti , the love for the arts travelled with her. Feeling as though this field was her calling, Clemetson went on to college, where she pursued a bachelor's in visual arts.

"After leaving high school, I actually applied and got accepted for law, but then I made a U-turn and decided that if I have a skill, it only makes sense to capitalise on it," she said.

Now at her alma mater teaching visual arts at the Caribbean Secondary Education Certificate level and arts and design at the Caribbean Advanced Proficiency Examination level, Clemetson can boast about her 95 to 100 per cent pass rate. She said that it has been a blessing to work at the school because she is able to pass on the importance of a proper work ethic and work completion to the children she teaches.

"All of this is possible because of Coral Brown and Jonathan Frazer, who taught me at Mico [University College]. I believe that the students excel so well because I let them work like me because I am an artist as well. I believe that when they finish a painting, they should be able to take it up and sell it immediately," she said.

The hard work has paid off over the years as some of Clemetson's students have been placed among the top 10 pupils in the Caribbean. This has happened for the past two years, and she is hoping that next year will be no different.

Even though it has not been an easy road, she says that it is all worth it because she teaches her students about critical thinking so that they can excel in whatever field they go into.

The Head of the Visual Arts Department, Carol Brown, told THE STAR that she could not have asked for a better teacher. She said that Clemetson is very innovative and she is a great team player.

"She is very hard working and brings out the best in the children because of her work ethic. I remember she took a child that did not have any potential and turned that child into an A student because of her originality and her ability to think creatively," she said.

As Clemetson's former teacher, Brown, believes that the school made an excellent choice when she became one of their teachers.

Other Jobs to Go Stories