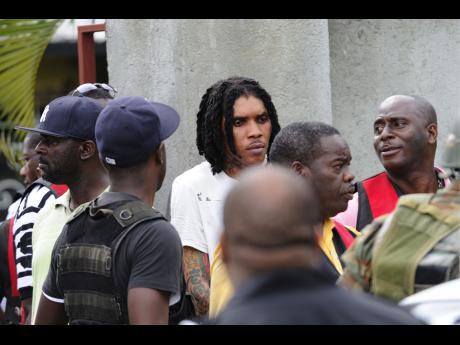 In this 2011 photo, Adijah Palmer, more popularly known as Vybz Kartel, is surrounded by members of the security forces.

Valerie Neita-Robertson, the attorney leading Vybz Kartel's appeal against his murder conviction, says the incarcerated entertainer is eager for the appeal court to deal with his matter.

“I believe Mr Palmer is very anxious and he prefers not to be here, so we give him that option,"  Neita-Robertson said. Neither Kartel nor his fellow convicts turned up at the Court of Appeal this morning for the eagerly-anticipated hearing, and  Neita-Robertson said "it is not necessary" for him to have been in court.

"He knows the grounds we are arguing, everybody has got a copy of it so they are fully aware of what we are doing. They have had an input in it as well,” the senior lawyer said.

She also said Kartel is in good spirits.

Meanwhile, the Court of Appeal has ruled that it will allow lawyers representing Kartel and his co-convicts to introduce fresh evidence in challenging their 2014 conviction for the 2011 murder of Clive 'Lizard' Williams.

The matter was adjourned to be continued Monday, July 16.

The lawyers successfully applied for the following evidence to be admitted:

1. An affidavit given by attorney-at-law Kimberli Whittaker.
Whittaker's affidavit includes the statements of two jurors who served in the entertainers' 2014 murder trial. The two statements are part of the evidence in the corruption trial of another juror, who allegedly tried to influence the seven-member panel to free Kartel and his co-accused.

2. A handwritten statement by the main prosecution witness and an affidavit of murder-convict Shawn Storm.

3. Affidavit by Shawn Storm about his being excluded from a discussions in chambers during the trial about alleged bribe attempt of by a juror.