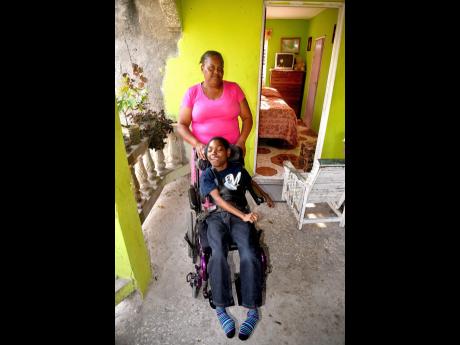 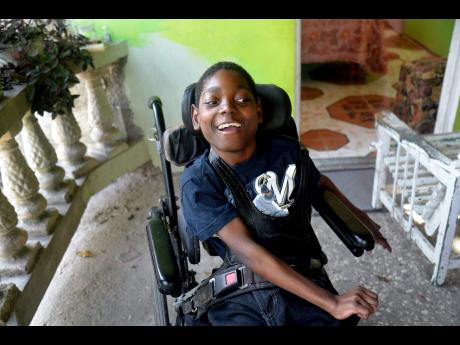 Okoye Henry photo Despite his disability, Leonardo Samuels is a happy young man.
1
2

Having a child who was born with a disability has been a long-time struggle for Merous 'Bubbles' Samuels of Copse in Hanover.

The last of her three sons, 20-year-old Leonardo Samuels, was born with physical and mental disabilities, which have been a challenge for the poor family.

"Well, he is physically and mentally challenged, and it gets harder for me, seeing how everybody mostly work and not having somebody to fit in for me when I'm not around," said Samuels, who now works at the West Haven Children's Home in the area.

Samuels said that when Leonardo was born, she and her husband felt destroyed.

"Them say he lacked oxygen while coming out, so they put him on a machine. I was in tears. I couldn't accept it. I was given some hope by a doctor who told me that he was going to walk and talk even though his brain is not going to be like a normal child. I said if him walk, I would live with that. But while growing up, I didn't see any of that and fell back into depression," Samuels explained.

"I was going to hospital back and forth with him ever since he was born, with no improvement. When he was 15 years old, they took him off the clinic [list], saying him no sick [and] me must not carry him back up there," she added.

The mother noted that on that day, she also saw her son's original doctor for the first time in 15 years.

"I said: 'I recognise you. You were the one who told me that he was going to walk, and after 15 years you never see this child'. I was so upset with him, I said: 'You mean you do me that?'" Samuels said.

Leonardo is bedridden and has to be fed through a bottle, according to the family. Through charity many years ago, they were able to get him a special wheelchair that has assisted greatly with mobility around the home.

"However, we would like a new wheelchair with the jacket strap for him, because this one is falling apart and he grow out of this. Sometimes some people would come and say you don't need anything. It seems like you have, but that's not true. With this child, you must need something," a teary-eyed Merous said.

The family is pleading to the public for any help they can get.

"I don't mind if I get one (a wheelchair). I would take any help I can get," Merous said.