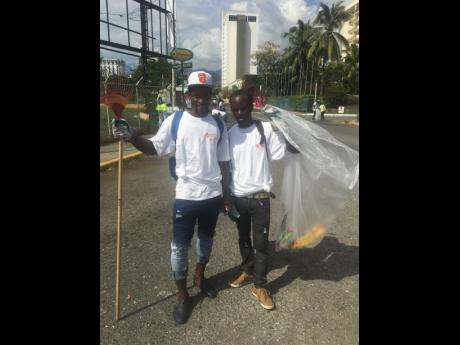 The idea of cleaning up after the 'hurricane' that is the Carnival Road March has passed might be a turn-off to the regular nine-to-five worker, but Fabian Grant, a farm worker, says it is actually an exhilarating feeling.

Grant has worked with Garbage Disposal and Sanitation Limited for the past three years, doing collection and cleanup of the waste materials left behind the carnival bands.

“It is work but it is fun. Other than the sun, the ladies on the road are hot and it is exciting to see people getting along so well,” Grant told THE STAR.

He said, “The first time was so good and after dat mi decide mi going get mi friend ah work.”

“Ah Sunday work and nuff people sit down at home nah do nothing; have to be grateful because them celebrations make we have work when di work not there,” he continued, sharing at the same time that farming is not continuous.

He also gets work to cut cane every now and again.

His friend Paul Campbell was raking trash when THE STAR caught up with him.

He says that the people are responsive to the Nuh Dutty Up Jamaica campaign, “From what we pick up it not so bad as some people think … (we collect) nothing out of the ordinary, bottles and paper.”