'Short Man' being sought in connection with hospital shooting 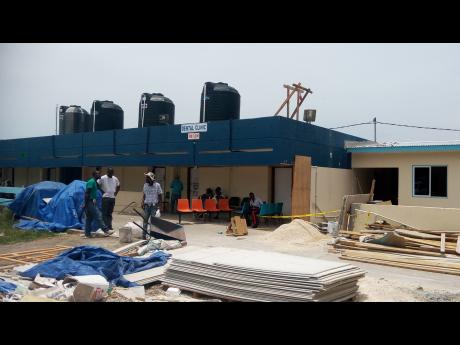 Photo shows workers back on the job at the Cornwall Regional Hospital construction site.

The St James Police have reported that they have now launched a manhunt for a man who is known to them so far only as 'Short Man', in connection with the shooting incident which led to two workmen being injured at a construction site on the Cornwall Regional Hospital compound on Tuesday.

Our news team was told by a senior officer that the suspect is believed to be living in the Mount Salem area.

"We are also asking any member of the public with information that could assist in our investigation, to call the Freeport or Mount Salem police stations, police 119, or Crime Stop," the policeman said.

THE STAR has learnt that extra security measures have now put in place to ensure the safety of the workers at the hospital construction site.

Work commenced at the site on Wednesday morning in full swing, but a number of workers were on edge and displayed signs of nervousness.

Workers told THE STAR that armed personnel have now placed at the location to prevent further occurrences of similar nature.

" Wi still feel a little afraid because you know, the shooter still out there and wi don't know when him might want rally back pon wi," one worker said. "Although wi si the security them, but wi still have fi look out fi wi self, because u never know."

Reports are that about 11:30 a.m., the accused, who is employed as a labourer to a construction company carrying out repairs on the hospital, got involved in a dispute with two other construction workers.

During the argument, the men exchanged a barrage of expletives at each other. The accused reportedly ran from the rear of the hospital compound to a section of the Mt Salem community, and returned with a firearm.

He opened fire, hitting one of the men with whom he had the dispute, and also hitting another construction worker who was standing nearby.

Both wounded men were rushed to the emergency unit at the hospital where they were treated and admitted in serious condition.