I am able: Blind but independent - Damion Rose refuses to be crippled by disability 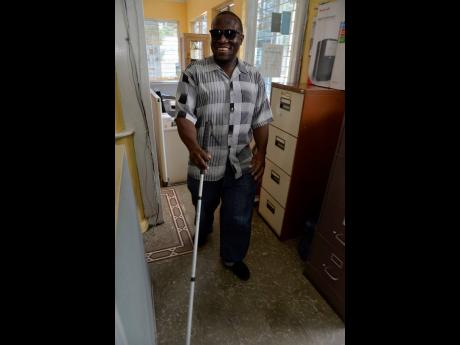 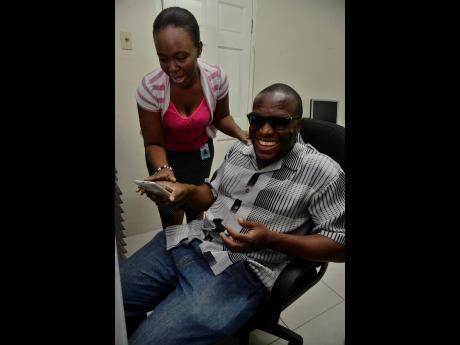 Meet Damion Rose, receptionist/audio producer at the Jamaica Society for the Blind, and part-owner of Vision House Records. Despite losing his vision as a toddler, the 36-year-old refuses to be a crippled by his disability.

“I like to work for everything I have. Sometimes once a person see a blind man/woman, they instantly think we are seeking help or begging something. People will see you standing up outside waiting for somebody, and the first thing in their head is that we are looking handouts, and that is not always true,” Rose said.

Rose, a native of Westmoreland, said he lost his sight at age two after undergoing a surgical procedure that went wrong.

“I was born with glaucoma, but I could see. But the issue was that while I was looking at a person, my eyeballs would be all over the place. My mom and grandmother thought something was wrong with that and they sought medical attention at the Cornwall Regional Hospital, but after the procedure I went completely blind,” he said.

He told THE WEEKEND STAR that his mother stood by his side and gave him the best opportunity to succeed in life.

“She went to Kingston to seek a better life and a year later, she got me enrolled in the Salvation Army School for the Blind. There they taught me to be independent and not to rely on others to assist me, so that is where I learnt to cook and so on. I then went to Calabar High School, where I fit in really well because I am a people person,” he said.

After high school, Rose said he had plans of getting a job in order to fund his college education. However, he had no idea that gaining employment would so difficult.

“The job market is not that open as we would want it to be for blind persons. Over the years I sought jobs but did not get through, so I went to Abilities Foundation and did a two-year course in information technology, and that is how I got into artistic technology,” Rose said.

His passion for entertainment also led him to try his hands at record production.

“I have done a lot of music productions, but persons in the industry don’t think we need money. I have done a lot of work on several known rhythms that I have not gotten paid for. After seeing how we were being treated, that is how myself and Michael Fairman decided to launch Vision House Records,” he said.

Vision House Records are the production house behind Jah Vinci’s Sad Story, as well as other known singles.

According to Rose, he looks forward to getting married and starting a family in the future, but states that the stigma that is placed on persons living with disabilities may sometimes prevent them from getting into a steady relationship.

“It goes back to the whole stigma that is placed on the blind. A girl may think that because a partner is blind she will have to do everything for him, but that is not true. We are able to do anything and everything on our own. Very few blind people get a chance to settle down, because even if a girl likes you, the pressure from friends and family alike will probably make that relationship not work. I am still searching ... I still have hope,” he said.