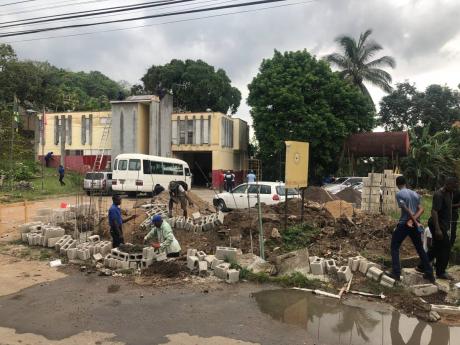 Workmen work on the perimeter of the Stony Hill Fire Station.

The Stony Hill Fire Station got some much-needed assistance on Labour Day.

The previously deplorable state of the fire station and less-than-comfortable conditions under which the men and women had to work was reported in the media earlier this year.

Superintendent Patrick Gooden, Jamaica Fire Brigade operations officer for Kingston and St Andrew, told THE WEEKEND STAR that the station had been selected as this year's recipient for the project.

"We are doing some major works which started two weeks ago. We increased the tempo on Wednesday into yesterday (Labour Day). We are building a perimeter wall, painting, trimming trees, electrical repairs, as well as tiling in some areas where it's required," Gooden said.

Our news team was also told that several members of the brigade's top brass were on hand and got involved in the activities.

Several residents from the community also came out to lend a helping hand.