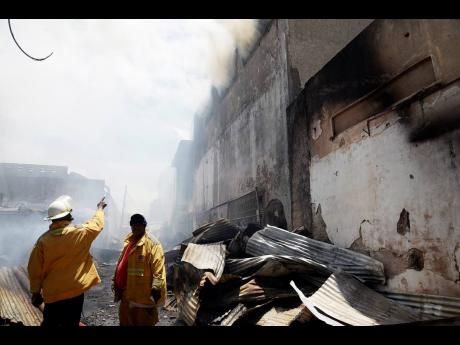 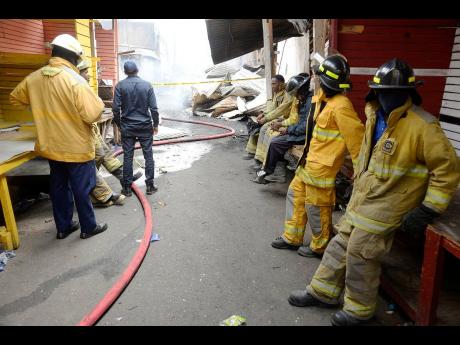 More than 150 vendors who operate businesses on Matthews Lane in downtown Kingston were left to pick up the pieces after their stalls, stores and the barrel house that secured their items were destroyed in a fire that started about 3 o'clock yesterday morning.

One store owner, who wanted to remain anonymous, said that he got a call from King Alarm about a fire at his premises early yesterday morning and rushed to the scene.

"Me get a call 'bout after three this morning, and mi run come dung yah. Mi start call some a mi vendor friend dem so that they could come and try save some things. But when me reach, the place a blaze," he said, adding that he relocated to his current location two years ago following a fire at Redemption Arcade in downtown Kingston.

"This yah fire worse than arcade fire. The fire at arcade would a done already, and things would be business as usual."

Acting Senior Deputy Superintendent Horace Thomas, who in charge of operations for the Kingston & St Andrew division of the Jamaica Fire Brigade, told THE STAR that they received a call at 2:58 a.m. about the blaze, and the Trench Town and York Park fire units responded. He said that personnel from the Stony Hill, Port Royal and Half-Way Tree fire stations later came to assist with cooling-down operations.

"Forty-nine firefighters were on site combatting the blaze. Sadly, one of our firefighters got an electric shock. He was taken to the hospital, observed, treated and released," he said.

At 11 a.m. yesterday, Thomas said there were no reports of civilian injury. He also said that the fire was under control.

Stacy McLaughlin, the owner of a 25-year-old boutique that caught fire yesterday, said that her sister and mother also operate businesses at the same location. She explained that she recently purchased goods in preparation for the graduation season, but there is nothing to sell now.

"A millions mi lose. All mi haffi do yah now a trust inna God," she said.

Talcia Brown, who operates a liquor store on the lane, said that she received the dreaded call about 3:30 a.m. However, the mother of two, who resides in St Catherine, didn't get to the scene of the fire until about 5:30 a.m.

"Most persons who were at the arcade and get burn out come over yah so, and this go happen again. Mi lose mi two deep freeze, mi igloo, mi liquor dem. Mi lose so much," she said.