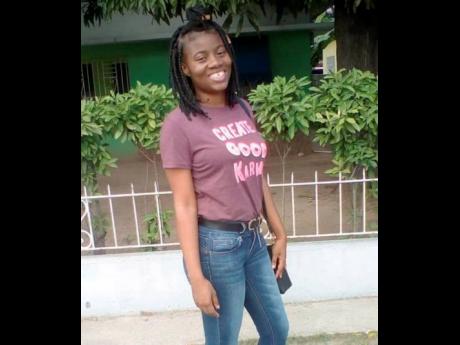 Twenty-year-old Ronique Young left her Washington Boulevard home last Thursday for work, but did not show up.

Her mother, Joan Young, said that she has been desperately trying to find her since.

"She was supposed to take her child to school, take a bus to Price Rite and then from Price Rite, a bus or taxi to Red Hills Mall, where she works. Then, from there, she would go to Half-Way Tree to pay a voucher for her son's school fee. Then she would come back to me, give me the voucher for me to carry to the orientation at 4:30 p.m.," she said.

Young said she became worried after Ronique did not contact her throughout the day. After numerous attempts to call her, she did not get through.

"When I see like one o'clock and she never call, I called just to find out how far she reach with it and what's going on. But I was not getting her, so I called the workplace, and they told me that she hadn't been in from morning," she said.

She said she went to her workplace later that day, and from there to the Duhaney Park Police Station to make a report.

Young said that her family has been trying to get the word out about her daughter's disappearance by using social media and posting flyers, while trying to shield Ronique's six-year-old son from knowing that his mother is missing.

She is pleading with anyone who may have taken her to send her back home.

"Just send her back to me. I don't want know nothing, I just want her. Just send her. Even though she has a baby, she's still my baby," she said.

Anyone with information on the whereabouts of Ronique Young, can contact her mother at 876-853-0224