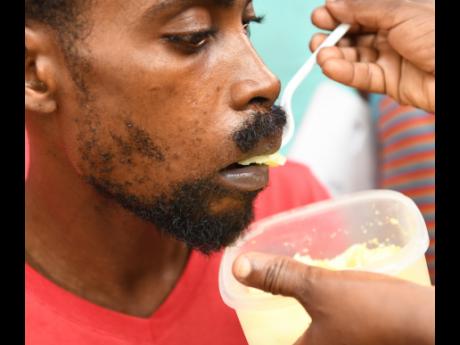 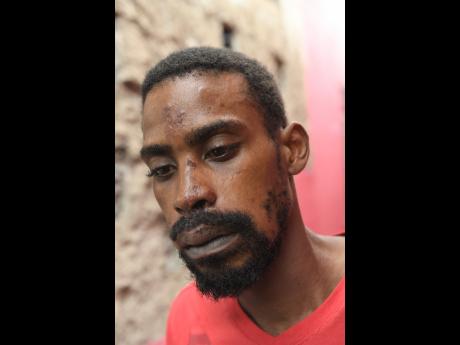 A 31-year-old father, who claims he was beaten up by a policeman in Maxfield, St Andrew on Saturday morning, was on Monday discharged from hospital.

Ricardo Humphrey struggled to tell his story when the news team contacted him. He said that doctors had to stitch up his jaw without inserting  a plate that he was told would help it heal. He said he could not afford to buy the plate.

In addition to the injury to his jaw, Humphrey's nose was broken and four of his teeth were hit out of his mouth, reportedly by a policeman who allegedly hit him with a gun.

Through muffled speech, he recounted that last Saturday, about 2 a.m., he was on his way home from work, when he got in an altercation with a female in his community.  He admitted hurling some expletives at her and that was when nearby policemen intervened.

"Mi work pan rubbish truck and so mi get pay and go home go give my madda a money, and mi sista. Mi friend call me and mi seh to har fi go s**k out yuh mada, but she know seh a joke mi a mek. The police seh him a go lock mi up for indecent language and me push mi two hand dem gi him and him put on the handcuff," he said.

Humphrey said that after he was handcuffed, one of the cops used his gun to hit him across the face.

"Me couldn't retaliate because me inna handcuff. I didn't have even anything on me apart from mi shovel and mi gloves and mi money. Mi still a ask why them hit me. A hospital mi wake up inna Saturday morning wid the whole a me face chop out and mi teeth dem lick out. Mi jaw caa move," Humphrey said.

His brother Kimorely Humphrey, who said he was not at the scene, believes his brother was unfairly treated.

When The STAR contacted commanding officer for St Andrew South Police Division, Senior Superintendent of Police Gary Francis, he said he was unaware of the matter. He said that he would investigate.

Humphrey said he has made contact wit the Independent Commission of Investigations and is scheduled to give a statement today. In the meantime, the father of two said that he is fearful for his life.

"Right now mi fraid fi go back to work because it nuh mek no sense me a clean the streets a night time and dem a go do them things yah to me. Mi shaken up mi a tell yuh he truth," he said.