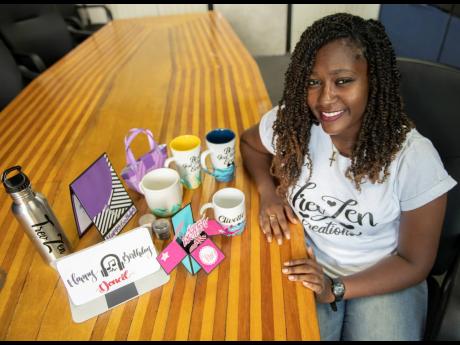 Trevenia Buchanon shows off some of her customised pieces. 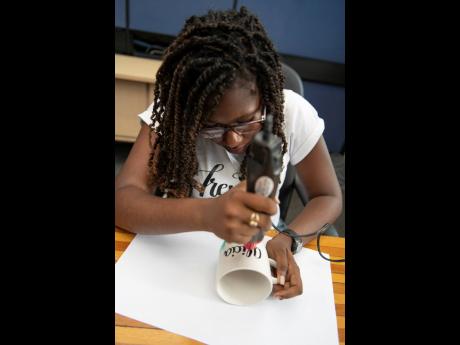 Buchanon adds a personal touch to a coffee mug. 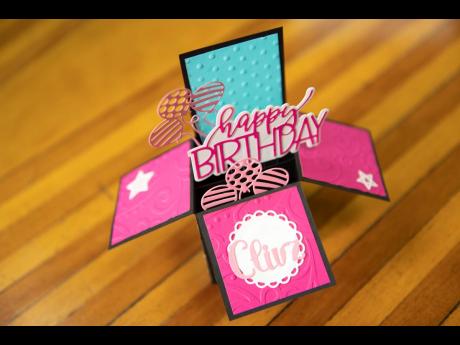 Two years ago, Trevenia Buchanon made a birthday card for one of her friends.

She did not think she would ever start a business from that one card, but that is what happened as now she is the proud owner of TrevZen Creations.

Even though she has a degree from the University of the West Indies in actuarial science, Buchanon said she is not interested in working in the corporate world because she has found her passion and she is dedicating herself to ensuring that her brand makes it big.

"A friend of mine wanted a Liverpool shirt and I could not afford it and I thought, why not make him a card? I got so caught up in calligraphy and looking at DIY and something sparked. I tried, my friend liked it and then I did another one for another friend and he liked it, and they suggested that I start to sell them," she said.

Buchanon never thought that art was her thing and decided to do actuarial science because she loved mathematics.

She figures that there is more money to be gained from a job linked to actuarial science but money is not her issue. She declared that being an artist is more important to her.

"I see money as a tool. I don't go after something because money is there. I enjoy doing this so much. I know I can make a lot of money in 'AcSci' but I am not interested in a lot of money, I am interested in fulfilment. When I give someone something, the smile and memory that come with it just warm my heart and I never get this feeling through AcSci ever. I just think the money makes you miserable if you are not getting something from it," she said.

Currently, she does cards, pop-out boxes, and has expanded her creations to cups, key chains, and signs for weddings.

"Young people like to make a name for themselves in this generation and we like to see our names all over the place. Most persons ask where I learned to do something like this because I did not do arts in CXC and I've always got a better feedback than I expected. People cry tears of joy when they get a card. God is the reason for my gift and in many cases I get a lot of inspiration from the (Inter)net," she said.

The 23-year-old said she thanks God for giving her this gift and for the continued support she receives from friends and clients.

Her peak times are Christmas, Mother's and Father's Day and Valentine's Day. Nevertheless, she said that she always has work because people call months in advance for her to create something.

"People call and ask for a scrapbook and sometimes they ask for something that at first I think is not possible. They would explain it to me and would say 'You can do it man' and I would say okay and I try it and it turns out really good," she said.