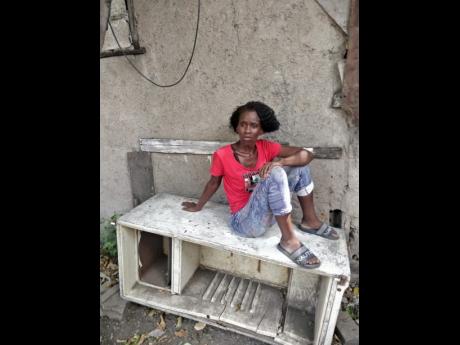 Internet sensation Candy Baddy is back home with her family, one day after she mysteriously disappeared.

Surrounded by her family members and members of her management team on Monday, the 28-year appeared disoriented as she claimed to have been beaten by persons who took her away.

"Him call mi and say we a go to a party and when mi go in the car him asked me if mi want something to drink and mi say mi want a Pepsi. Him give mi a Coke instead, and from mi drink it mi just feel different. Mi feel weak and mi can't sleep. Him carry mi to a show and mi perform and a just $1,000 mi get and a gift basket," she said.

Wearing the same clothes that she had left her home in on Sunday, Candy pointed to a swelling on one of her legs. She said it was caused by a man who beat her and accused her of being ungrateful.

"When him slap mi with the board it come like a seven people mi a see. ... When mi get the box inna mi face, mi don't know mi self," a tearful Candy told THE STAR.

Candy was found in the Spanish Town area of St Catherine on Monday morning.

The entertainer, whose given name is Kerisha Brandon, has garnered more than 22,000 fans on her Instagram page since a video of her dancing to Vybz Kartel's Come Home went viral.