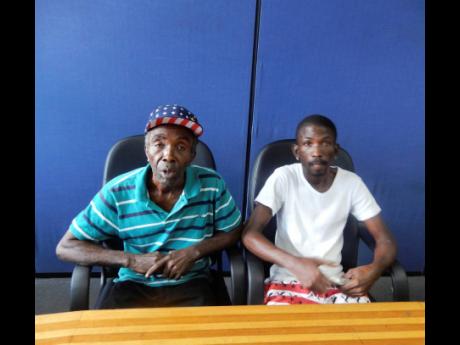 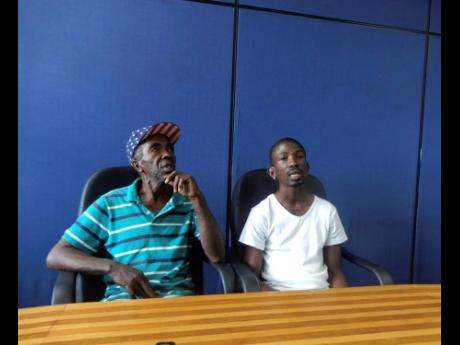 When Gentle and Aston Barrows visited THE STAR offices earlier this week, it was obvious that they were devastated based on their facial expressions. The father and son duo said they are seeking the public’s assistance in paying a debt of approximately $180,000 after their goods were confiscated by the police last Thursday. The fruit vendors say they were peddling their fruits in Half-Way Tree when they were accosted by the police.

“Is rent we rent the cart and a push it to Half-Way Tree and right as we reach close to Brooklyn Supermarket, somebody ask to buy something. Same time a police a pass and say we must push the cart go round a the station and we comply. Him unload the goods and decide to lock up mi son,” he said.

Gentle said after he bailed his son, who was slapped with exposing goods for sale charges, he begged the officer to return the goods explaining that he had taken them on credit from another vendor. Aston added that their pleas just fell on deaf ears.

“When mi get bail, the goods were still there and mi preach to the policeman and beg him to give me back di goods dem. Mi hurt because the vendors dem who come a Coronation Market trust the goods from farmers in St Elizabeth and den come trust we dem so we can make a money too. Mi beg the man back the goods and him nuh give me,” he said.

Gentle stated that when they returned to the station the following day, they were told that their boxes of grapes, melons, and pineapples were donated to charity.

“Mi couldn’t find di money fi did send mi granddaughter and mi likkle daughter to school cuz dem tek whe mi goods, so mi carry di pickney dem with mi. Mi deh station the entire day because him (the police) never come a work till late and mi plead mi case to him again. Mi ask him how mi daughter a go school and him say a nuh fi him business dat,” Gentle said as tears welled up in his eyes.

The Pink Lane residents said they are now left to foot a bill of almost $200,000 as they have to pay for the handcart that they had rented.

“The people dem want dem money and I don’t know whe mi a go do. Please mi a beg uno likkle help. Is a youth from Luke Lane mi rent the cart from and is $25,000 or $30,000 we have to pay back for it because we nah get it back yet. The handcart still deh dung a station like criminal. Mi and mi son ever a try but right now wi deh pon wi face, so mi a beg uno, please help we out. Sunday, the way mi bruk, a little rice, coconut oil, and ripe plantain mi cook give mi family,” Gentle said.

THE STAR reached out to Senior Superintendent Jacqueline Coombs of the St Andrew Central Police Division for a comment, however, calls to her cellular phone went unanswered.