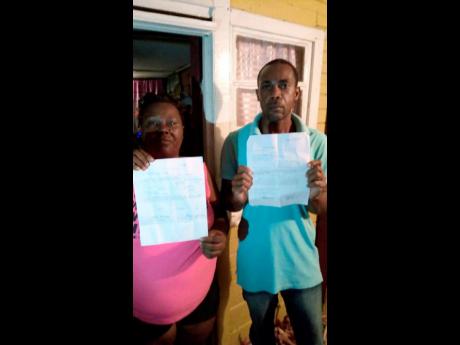 Imagine being carted off to jail the night before your brother's funeral and be forced to remain in lock-up while your loved one is being buried. The crime for which you have been accused is not a major one, yet you lost the opportunity to pay your last respects. That was what happened to Vadika Thompson and her brother, Dalton Thompson, after they were accused of playing music at his wake without a permit.

"My brother Derrick Thompson, was 43-year-old when he died, and he was a very good community mason, and the breadwinner to his two children. We decided that we would keep a little family get together at our home in King Gate, Anchovy, and that was when the police came," Vadika told THE STAR.

She said that the family members were playing music from a small set about midnight when three cops showed up. Vadika said that two of the officers behaved with respect, but the third officer behaved "disrespectful and started to act boisterous towards me, and my family".

"He asked if I had a permit and I told him I did not know that I need a permit to keep a family get together, especially when we were using a component set, which was inside the house. He then started to use some harsh words to me, and that was when my brother who was also visiting intervened. He cautioned the police that he was not addressing me in the proper manner, and that was when the officer went to the verandah and started to drag him off. A number of disgruntled family members approached him, and he pulled his gun and fired a shot."

But the police gave a different account of the incident. They claimed that a team of officers who went to a wake to turn off a sound system, which was allegedly playing without a permit, nearly found themselves in hospital after they were attacked and stoned by angry residents attending the wake.

However, the Thompsons are disputing that report.

"Nobody attacked him with any stones, that is a outright lie," Vadika stated.

Dalton told THE STAR that he is a church man and has a decent record. He said he is still in disbelief that he and his sister did not get to attend his brother's funeral because they were locked up illegally by the police.

"I have never been to jail in all my life. When I went to the family home the little component set was already playing, I live with my wife at my own house in another community, but I was charged for breach of the Noise Abatement Act, for somewhere that I don't even live. We are now seeking justice, and we intend to take this matter to the full length of the law. We were treated like animals, and if the officer had just come to the house and asked my sister to turn off the music, she would have."