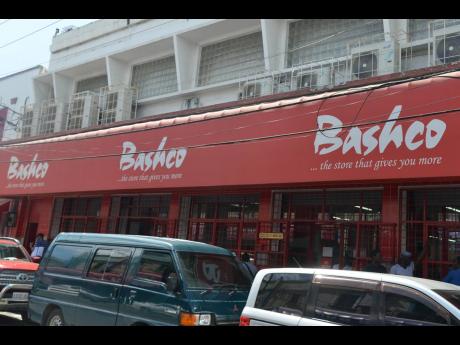 Police are probing a robbery at the Bashco store on Orange Street in Kingston. The robbery reportedly took place between 3 a.m. and 4 a.m. yesterday.

Vendors along busy Orange Street in downtown Kingston were shocked when they learned of the break-in at the popular Bashco outlet yesterday.

The Kingston Central police indicated that the break-in may have taken place sometime between 3 a.m. and 4 a.m. yesterday morning.

The thieves gained access to the building through the roof which led to the second floor.

"A just last week dem put in the camera dem at the front, enuh, because people did lick dem out. All mi a seh dem teef deh brave because the place full a security camera," a vendor said.

But persons were equally shocked that the store was open for business, albeit after getting off to a late start yesterday. The store was closed until about noon yesterday.

"Right now things just a business as usual because mi did think fi supm so big dem would a close the store fi get proper details a wah gwan, but the store open; so a so it go," the woman said.

General Manager for the store, Omar Azan, told THE STAR that while they were still evaluating, he could confirm that items and cash were missing from the store.

"Nobody was hurt, no staff was here when it took place, thank God. We are still evaluating what was taken and what was damaged. It is a big store and a big building; it's a whole heap of stuff that we have to go through still. I'm still trying to ascertain all of the details. There is an entry point, there is an exit point but I don't want to say without definite confirmation," he said.