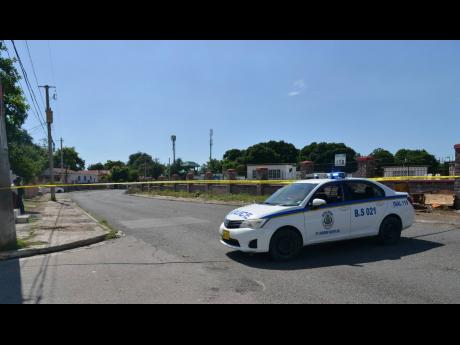 Police cordon off a section of Waltham Park Road after lawmen shot and killed a gunman in the Chinese Cemetery yesterday.

One gunman who, along with two others shot at a group of persons yesterday morning in the lower Waltham Park Road area in St Andrew, was killed by members of a police team in a running gun battle through the Chinese Cemetery.

THE STAR understands that immediately after the gunmen turned their weapons on the civilians, a police patrol team engaged the gunmen.

One man, who later succumbed to injuries, was found in the cemetery with multiple gunshot wounds. It is unclear what happened with his two cronies.

Up to press time last night, no official word on the number of casualties had come from the police's information arm, but Assistant Commissioner of the Independent Commission of Investigations, Hamish Campbell, said that two people were killed, but only one taken down by the police.

"In the incident, two people were killed, but only one of them shot by the police. One person was injured, but that appeared to be injuries from other gunmen and not the police," he said.

A resident of Mission Road in the area said that the dead gunman, who is from Crescent Road, and his cronies have been terrorising the community.

"From week start, dem shoot up Latore Avenue and Burke Road, and dem come this morning come shoot a man on this street. Sometime recently, him kill a man out at Julian Drive off Waltham, and from there, him name start hot up," the resident said. "This is a victory! People around here don't like police, but this morning, a nuff thumbs up dem get."