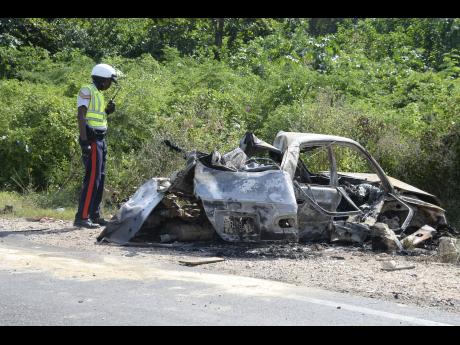 Two persons have died as a result of injuries sustained in a motor car after a collision on Chesterfield Drive in St Andrew on Monday.

The deceased have not been identified, but eyewitnesses say that they are among four persons rescued from the crashed car before it burst into flames.

The accident involved three vehicles – a car, a truck, and a trailer. Eyewitnesses said that some time after 11:00 a.m., the car, which was heading east towards Marcus Garvey Drive, crashed into one of the rear tyres of the truck, which was heading west towards Seaview Gardens. The car reportedly veered into the path of a trailer, which, in an attempt to escape it, swerved off the roadway.

It is unclear what caused the car to burst into flames.

Persons on the scene said that the four occupants of the car were rescued and taken to hospital, where two of them died.

Some 397 persons have been killed due to traffic crashes since the start of the year.  The Road Safety Unit says that of those 397 deaths, vulnerable road users such as motorcyclists, pedestrians, cyclists and pillion passengers account for 64 per cent of fatalities.

Road fatalities for 2019 are projected to increase by seven per cent when compared with 2018, when 389 persons died as a result of road crashes.