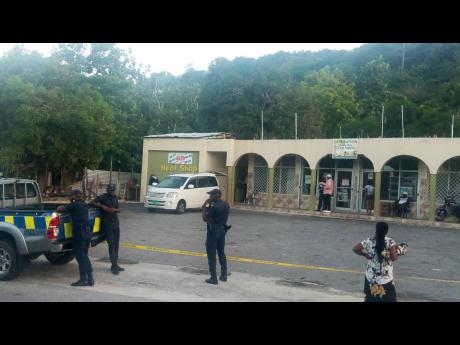 Police personnel at the crime scene in Sandy Bay, Hanover, on Monday.

A meat shop operator who turned 50 on Sunday was shot and killed yesterday afternoon at his shop in Sandy Bay, Hanover.

He has been identified as David Caslay, businessman of Big Well Lane in Lucea, in the parish.

Reports are that shortly after 3:30 p.m., Caslay, who operates the Cals and Lee Meat Shop located along the Sandy Bay main road, was seated outside his business place when two men rode up on motorcycles.

The men brandished handguns, and upon seeing them, Caslay ran back inside his shop. But he was chased by the men who opened fire hitting him multiple times.

The gunmen jumped back on the motorcycles and sped away from the scene.

The Sandy Bay police were summoned and upon arrival, the wounded man was transported to the Noel Holmes Hospital where he was pronounced dead.

Caslay is the second person to be killed in Hanover since the start of the year.

A bus operator, 43-year-old Carl Amberley, was stabbed to death by two men while at a shop inside the Lucea Bus Park last Wednesday.