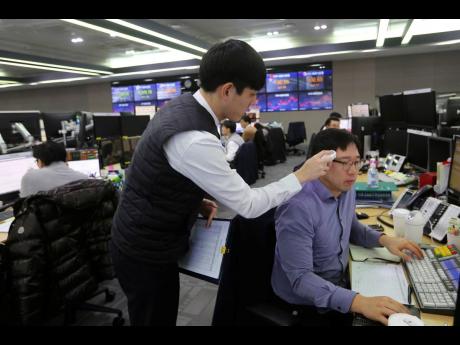 A currency trader checks the temperature of his colleague at the foreign exchange dealing room of the KEB Hana Bank headquarters in Seoul, South Korea, on Thursday. Asian shares were mixed Thursday after Wall Street recovered to record highs, but worries continued about the damage to the regional economy from the new virus that began in China.

The virus outbreak in China has put South Korea's economy into an "emergency situation", its president says. Japan is on the brink of recession and big manufacturers are forecasting a whole world of woe.

As many Chinese finally go back to work after their longest Lunar New Year holiday ever, the economic fallout from the outbreak that began in the central city of Wuhan may be just beginning. Companies are warning their bottom lines will take a hit, and governments are ramping up stimulus measures for economies that just weeks ago were hoping to see recoveries after months of uncertainty due to trade tensions and slowing global growth.

"The current situation is very serious, even more so than thought," Moon said. "We should put every measure we can think of on the table, regardless of whether there were precedents or not, and employ every means possible."

Many in the region were hoping that an easing of trade tensions thanks to a truce between the United States and China in their tariff war would help revive sluggish trade this year. The virus outbreak has sideswiped the region with a raft of new, potentially much broader uncertainties.

Central banks across the region have already begun slashing interest rates to help ease credit as tourism arrivals plunge and manufacturing and delivery networks get entangled in bottlenecks caused by lockdowns inside China intended to help contain the spread of the virus, which has killed more than 1,870 people and infected more than 73,000 globally.