Woman gets heart attack after being told house will be demolished 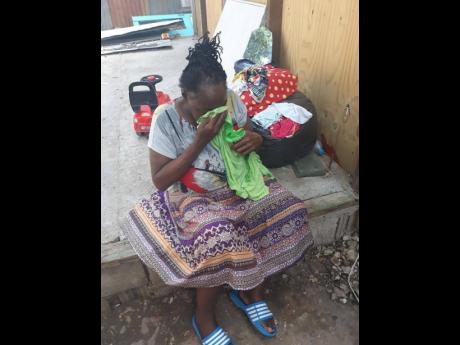 Nadine Brown wipes the tears as she spoke about being asked to leave the only home she knew. 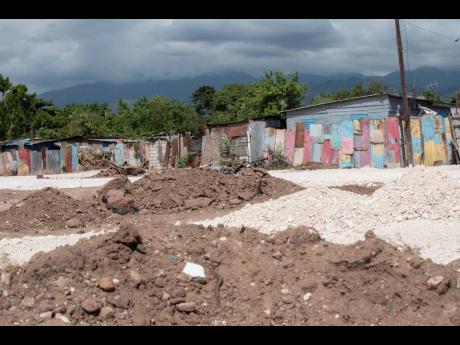 An area in Maxfield Park called Frog City where a number of homes have been demolished, making way for a new housing development. 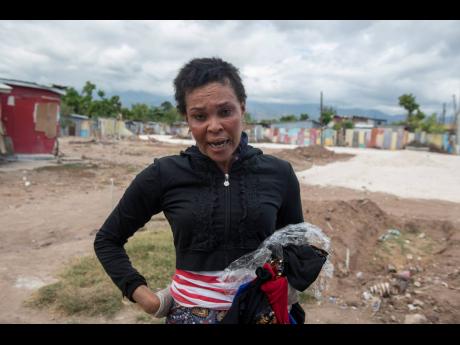 Bridgette ‘Tutty Gran Rosie’ Bailey is dissatisfied with the way in which demolition is taking place in Frog City.
1
2
3

Maxfield Park resident Nadine Brown rested her head in her arms and cried her eyes out as the thought of being homeless flashed across her mind. The house in which Brown has lived in for decades will be demolished by National Housing Trust contractors, who are currently in the process of starting the $810-million Maxfield Park Housing Project. The project is being done under the Community Renewal Programme.

"The first time mi hear say mi have to move me feel a pain hit mi in the chest and when I go to the doctor the next day, him tell mi say is a heart attack mi get. Mi was a fat gyal enuh, and mi get slim down now. Every Thursday mi have to gone a doctor. This a whe mi pickney dem born, and mi mumma live here so and gone, and now dem a tell we to leave. Mi tiad fi cry," Brown said.

The houses and small businesses are currently being demolished to accommodate the 210 new units from the housing project and those residents who are currently paying NHT contributions are eligible to apply for one of the brand new houses.

The section of Maxfield Park, commonly known as 'Frog City', could easily be labelled as one of the most impoverished inner-city communities in the country with dirt roads, zinc fences and broken-down homes with outside kitchens and toilets. Like several other inner-city communities, residents of Frog City do not pay utility bills.

However, the planned infrastructure works will not only bring new houses but also paved roads with kerbs, storm water drains and centralised sewage-collection systems.

Several houses in the areas have already been demolished. Brown's house is in the demolition line but she has not waited for the bulldozers to reach her steps.

"Mi see say mi nuh have no other choice except to move so mi take down the board dem off the house because mi a plan to use them on the next house that I am going to build," Brown said.

Brown is just one of dozens of persons whose houses are set to be demolished to make way for the housing project. So far, a little over 20 houses have been knocked down and marled roadways are in now in their place. Pipes have also been laid underground in some sections of the community. Residents, whose houses have been demolished, have been given $30,000 as compensation.

Staring at the spot where his concrete structure was once, a male resident told THE WEEKEND STAR that he has had to move his family into other people's living space.

"We knew they were coming I am not going to lie, but a lot of us don't have anywhere to go because this is where our family born. We don't have any family in country or anything. Mi nuh reach 30 yet and mi work and save mi money and build the house and mi nuh get a chance to live in it for three years. Mi spend approximately $400,000 to buy materials and have to find other money to pay people and it just gone suh," he said.

The WEEKEND STAR obtained a copy of a contract that has been signed by dozens of residents who all agree that upon receiving a $30,000 grant as an assistance for relocation from informal settlement, they would vacate the premises within seven days. They also agreed that the housing structure that they presently occupied is preventing progress of the infrastructure being carried out.

Frog City residents are clear that the development was a welcome change but they are not happy about the inconvenience they are being made to endure.

"A right yah suh mi born and grow and dem bulldozed down the majority of my house already. Is the little part that leave mi have to be staying in. Is during the first half of last year them start tear down the place. It really rough because no one is here to support us," Yacee Forrester said.

Seventy-five-year old Stanley Wright has been living in Frog City since he was 18 years old. Currently blind, the elderly man said he has nowhere to go.

"Me get old and blind and mi can't work to pay rent anymore, or mi can't pay NHT, so what mi a guh do? Dem say we must move anytime we get somewhere but mi can't even get around because mi blind and broke. Mi can't manage the price of the house that dem a build so it better dem did just give us make we pay for it little by little," he said.

The WEEKEND STAR reached out to the NHT head for a comment but calls to his cellular phone went unanswered.