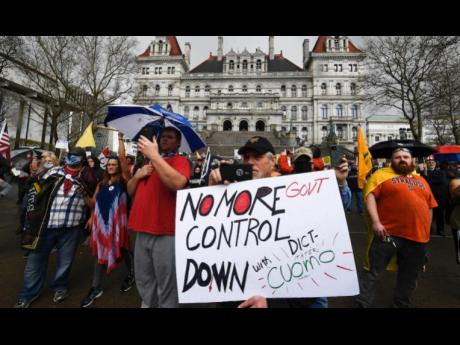 NEW YORK, May 31, CMC – The Caribbean community in New York has expressed profound outrage over the recent death of a black man in the town of Minneapolis  .

On Saturday, in at least 75 cities, mayors declared curfews, governors deployed the National Guard and demonstrators even reached outside the gates of the White House, from where protesters claimed that President Donald J. Trump fanned the flames of violence.

The Caribbean community joined the national outrage after video footage showed a George Floyd, 46, being pinned to the ground by a white police officer in Minneapolis, who kneeled on his neck for over eight minutes.

Floyd, who stopped breathing, was pronounced dead when reused to hospital.

Bichotte, the daughter of Haitian immigrants, who represents the largely Caribbean 42nd Assembly District in Brooklyn and who chairs the Brooklyn Democratic Party, urged protesters on Saturday to remain peaceful.

She also called on New York State legislators to help pass a bill that she introduced, A4615A, to prohibit police officers from racial profiling.

“George Floyd is a casualty of racial profiling by police. He died because of a systemic injustice; an injustice that is as pervasive in New York as it is in Minneapolis,” Bichotte told the Caribbean Media Corporation (CMC).

“The truth is here: A Black man was murdered in public by the very people charged with carrying out justice and keeping our communities safe,” she added. “The nation is reeling from the trauma of his death. Parents are asking how they can keep their kids safe when the offenders are the people wearing a badge, and they are not held accountable for their actions.”

“I have introduced a bill, together with State Senator Brian A. Benjamin, (#A04615A/S01137A) to end racial profiling by increasing data collection and reporting standards for law enforcement agencies in New York State,” Bichotte continued. “This bill would also allow any victim of racial or ethnic profiling, or the attorney general, to bring an action for damages, or for injunctive relief, to stop the agencies’ improper actions.”

She noted that current state law does not provide for an individual cause of action for acts of racial profiling.

“I believe this legislation is an important step toward putting an end to police brutality and the racial profiling of Black and Brown people by those sworn to protect us all,” Bichotte said.

Louis, who represents the predominantly Caribbean 45th Council District in Brooklyn, said she was “haunted by images of brutality and the final pleas of Black men and women of all ages.

“We persist in honor of those who have been unjustly detained and taken from us,” she told CMC. “Amid a (coronavirus) pandemic, there have been mass protests because we are tired of seeing those who look like us beaten, punched, shoved and killed by police.

“From slavery to present-day, Black people have experienced unimaginable cruelty and violence in an attempt to break us down – mind, body and spirit,” she added. “We have never fully recovered from the deep wounds inflicted by years of systemic racism, prejudice and privilege.

“We cannot afford to lose sight of why we protest – to demand justice, representation and equality,” Louis continued. “We have the right to live freely, and yet must remain vigilant during interracial interactions that could result in false 911 calls and potentially fatal police encounters.

“Words cannot pacify us, as promises of investigations and training have resulted in little or no reforms amongst the ranks,” she said. “When you incite rather than de-escalate violence, it only deepens the chasm that continues to divide our city and devastate families.”

In weighing in on the issue, President Trump instead took to Twitter on Friday, saying the Secret Service was ready to sic the “most vicious dogs” on demonstrators outside the gates of the White House.