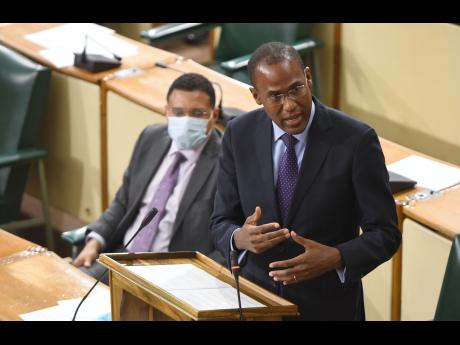 Minister of Finance and the Public Service, Dr. the Hon. Nigel Clarke, makes a statement in the House of Representatives on July 7.

Minister of Finance and the Public Service, Dr. Nigel Clarke, has reported that as at July 1, disbursements has been made to 396,311 persons out of the 415,888 eligible applicants, under the Government’s COVID Allocation of Resources for Employees (CARE) Programme.

He made the disclosure during a statement to the House of Representatives on Tuesday.

Dr. Clarke advised that some 250 applications were received for the Business Employee Support and Transfer of Cash (BEST Cash) component.

“Of these, 142 were ruled eligible and will receive grants for retaining some 14,000 employees. About 68 of the applicants failed eligibility by not having a tourism board licence,” he said.

The BEST Cash Programme provides temporary cash transfers to registered businesses operating within the tourism industry that are registered with the Tourism Product Development Company (TPDCo).

This is based on the number of workers they keep employed who are at or under the income tax threshold of $1.5 million per annum, as confirmed by Tax Administration Jamaica (TAJ).

Businesses that apply and qualify will receive $9,000 per fortnight for each employee retained on their payroll, which they will remit accordingly.

Dr. Clarke noted that the Government will pay the statutory deductions related to these grants of $1,392 per employee, for the employee’s portion and $2,400 for the employer’s portion.

“There has been a delay in the finalisation of the BEST Cash process due to several iterations of a processing validation audit with the Auditor General’s Department and this has caused a delay in payment. However, I have been informed that this has now concluded and payment instructions for BEST Cash grants were authorised,” he stated.

Regarding the Supporting Employees with the Transfer of (SET) Cash component, Dr. Clarke informed that approximately 32,970 applicants were ruled eligible to receive grants.

He noted that SET Cash payments have now been made for the months of April and May, for an average of 25,561 laid off employees with a valid bank account.

“The difference of just over 7,000 approved and eligible SET Cash applicants still have invalid bank accounts, and the CARE team is encouraging them by messages to update their payment information,” Dr. Clarke informed.

He added that Tax Administration Jamaica has done a review of previous eligibility results and is in the process of ruling an additional 1,500 applications eligible for payment.

“The payments for the final month of June, as well as payment for the new eligible 1,500, will be made by the week of the 20th of July with respect to that final component,” the Minister said.

The SET Cash grant is for persons earning $1.5 million or less, whose employment was terminated after March 10 as a result of the impact of the coronavirus (COVID-19) on economic activity.

For the Compassionate grants, Dr. Clarke informed that there were some 375,088 eligible applications, and transfers have been made to 361,614 persons.

The Minister also provided an update on the General Grant component.

“For the occupations that are linked to the Tourism Product Development Company, those who were deemed to be eligible, payments were transferred in respect of those occupations."

"Some 3,623 applicants who are airport red caps, raft captains, tour guides, craft vendors/producers and contract carriage operators, such as JUTA, MAXI, and JCAL would have been ruled eligible and payment batches created and disbursed,” Dr. Clarke said.

For bar operators, the eligibility exercise was done and 2,200 operators have been ruled to be eligible and the Auditor General is reviewing the results.

“For entertainment practitioners, eligibility is determined with reference to a register certified by the Ministry of Culture, Gender, Entertainment and Sport."

"The eligibility programme was executed for the 642 applications received and the results sent to the Auditor General for review. The Auditor General’s Department queried some of the persons who are eligible, as they were deemed to be athletes and not entertainment practitioners, and so we had to communicate with the Ministry and say your list needs to be redone and resent,” Dr. Clarke said.

He informed that the Finance Ministry intends to make a separate provision for sport practitioners, whose earnings have been interrupted by the pandemic.

For Early Childhood practitioners, approximately 3,697 applications were received. Eligibility was determined by reference to a register certified by the Ministry of Education, Youth and Information.

“The register was created and reviewed by the Auditor General’s Department. There were certain anomalies and [it was] sent back to the Ministry for update and the CARE team, once we get an updated list, we can run the verification again,” Dr. Clarke informed.

“With the transport operators, we are at the stage where the data is being sent to the Auditor General’s Department for review before loading and running up eligibility. And for the municipal registered occupations, there is the challenge of having… the data in the desired format and that is projected to take two weeks to complete that subset of the general grant occupational groups,” he added.

For small business, approximately 1,375 applications have been ruled eligible, and those businesses have received their grants.

“The Tourism grant was set at $1.2 billion and we will be using the EX-IM Bank and their infrastructure for those grants to be disbursed,” Dr. Clarke said.