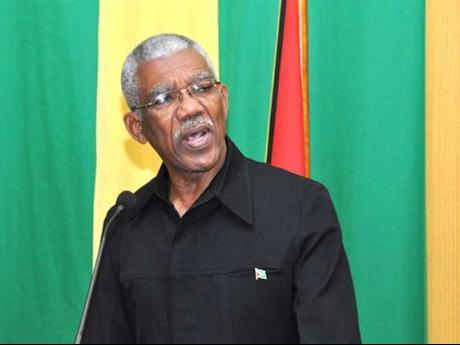 GEORGETOWN, Guyana, Jul 15, CMC – The Guyana government  on Wednesday said it regrets the decision taken by the United States to implement visa restrictions on persons undermining democracy” in the Caribbean Community (CARICOM) country where the official results of the March 2 regional and general elections are still being awaited.

“Today I am announcing visa restrictions on individuals responsible for or complicit in undermining democracy in Guyana. Immediate family members of such persons may also be subject to such restrictions,” US Secretary of State, Mike Pompeo said during a live press conference streaming on the U.S Department of State Facebook page.

“The (David) Granger Government must respect the result of democratic elections and step aside,” Pompeo said.

But in a brief statement, the Granger government said that “the matter affecting the outcome of Guyana’s elections is still before courts, which is entirely the responsibility of the judiciary. No declaration has been made.

“The Executive Branch has not participated in the undermining of the electoral process and urges all countries interested in Guyana’s development to await the logical conclusion of the process which is being managed by the Elections Commission, in accordance with the Constitution of Guyana,’ it said, adding that it has “not interfered in the functioning of the Elections Commission”

The government said it “regrets” the position of Washington.

Earlier, Chief Justice Roxane George-Wiltshire  said she will begin hearing arguments on Friday in the case filed by a private citizen seeking to prevent the Guyana Elections Commission (GECOM) from receiving a report from the Chief Elections Officer, Keith Lowenfield, regarding the results of the disputed March 2 regional and general election.

Justice George-Wiltshire, describing the case as one “of national interest and importance” intends to give a ruling, hopefully by Sunday, noting “it all depends on what is presented”.

Misenga Jones, a private citizen, through her attorneys, led by Trinidad-based Senior Counsel, John Jeremie, wants the Court to prevent GECOM from using the recounted, valid and certified results to declare the results of the election and instead compel the seven-member body to use the 10 district declarations.

She has named GECOM, its Chairman retired justice Claudette Singh and the Attorney General, Basil Williams.

Last Friday, GECOM’s chairman, retired justice Claudette Singh had informed Lowenfield by letter that he should revisit her previous communication of July 9 to prepare his report that would start the process of releasing the official results of the elections

Lowenfield had earlier written to Singh indicating that he needed guidance as to whether the report should be premised on Section 18 of the Election Laws or on Article 177 (2) (b) of the Constitution.

The GECOM chair has since rejected Lowenfield’s latest report.