US announces visa restrictions on those “undermining democracy in Guyana” 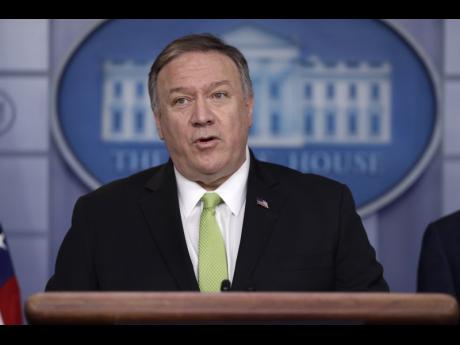 Us Secretary of State, Mike Pompeo

WASHINGTON, Jul 15, CMC – The United States government Wednesday said it would implement visa restrictions on persons in Guyana “undermining democracy” in that Caribbean Community (CARICOM) country where the official results of the March 2 regional and general elections are still being awaited.

“Today I am announcing visa restrictions on individuals responsible for or complicit in undermining democracy in Guyana. Immediate family members of such persons may also be subject to such restrictions,” US Secretary of State, Mike Pompeo said during a live press conference streaming on the U.S Department of State Facebook page.

“The (David) Granger Government must respect the result of democratic elections and step aside,” Pompeo said.

Earlier this month, Pompeo had warned about possible sanctions as the country awaited the official results of the elections that the main opposition People’s Progressive Party Civic (PPP/C) said it had won by more than 15,000 votes based on a  national recount that had been observed by a three-member team from CARICOM.

“It’s now been four months since Guyana’s election is long past due for a peaceful transition. CARICOM and the OAS (Organisation of American States) has certified the recount results and [they] should get on with it,” Pompeo said then.

The ruling coalition, A Partnership for National Unity (APNU) had claimed that there were several irregularities anomalies during the election and had called for its annulment.

Earlier this week, the London-based Commonwealth Secretary General, Dame Patricia Scotland, called on the Guyana Elections Commission (GECOM) to follow the directions given by the Trinidad-based Caribbean Court of Justice (CCJ) and decisively conclude the elections based on the results of the national recount

In a statement, Scotland said that the “will of the people as expressed” in the elections…must be respected for democracy to prevail in Guyana.

The OAS said that respect for the results of the national recount is Guyana’s “only democratic solution.”

The Washington-based hemispheric body noted that “the Chief Elections Officer of Guyana, in direct opposition to the instructions of the Chair of the Guyana Elections Commission, has submitted a final report which includes data compiled prior to the national recount; data which had already been deemed to be questionable”.