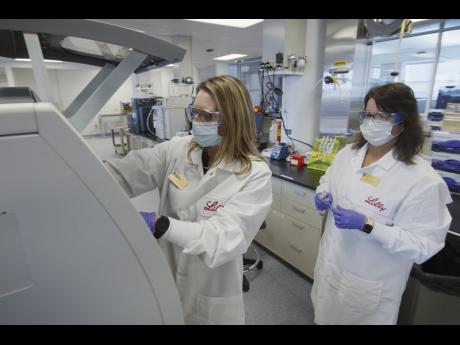 In this May 2020 photo provided by Eli Lilly, researchers prepare cells to produce possible COVID-19 antibodies for testing in a laboratory in Indianapolis. Antibodies are proteins the body makes when an infection occurs; they attach to a virus and help it be eliminated. (David Morrison/Eli Lilly via AP)

With a coronavirus vaccine still months off, companies are rushing to test what may be the next best thing: drugs that deliver antibodies to fight the virus right away, without having to train the immune system to make them.

Antibodies are proteins the body makes when an infection occurs; they attach to a virus and help it be eliminated. Vaccines work by tricking the body into thinking there’s an infection so it makes antibodies and remembers how to do that if the real bug turns up.

But it can take a month or two after vaccination or infection for the most effective antibodies to form. The experimental drugs shortcut that process by giving concentrated versions of specific ones that worked best against the coronavirus in lab and animal tests.

They’re also being tested as treatments, to help the immune system and prevent severe symptoms or death.

“The hope there is to target people who are in the first week of their illness and that we can treat them with the antibody and prevent them from getting sick,” said Dr. Marshall Lyon, an infectious disease specialist helping to test one such drug at Emory University in Atlanta.

Having such a tool “would be a really momentous thing in our fight against COVID,” Cohen said.

Vaccines are seen as a key to controlling the virus, which has been confirmed to have infected more than 20 million people worldwide and killed more than 738,000. Several companies are racing to develop vaccines, but the results of the large final tests needed to evaluate them are months away. Russia on Tuesday approved a vaccine that hasn’t undergone such a test, sparking international concern that it was cutting corners.

The antibody drugs are “very promising” and, in contrast, could be available “fairly soon,” said Dr. Janet Woodcock, a U.S. Food and Drug Administration official who is leading government efforts to speed COVID-19 therapies. Key studies are underway and some answers should come by early fall.