Vaccine storage issues could leave 3B people without access 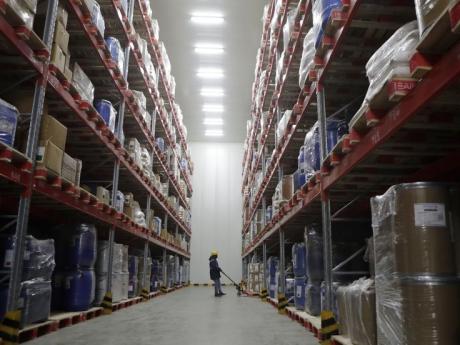 A worker moves boxes at Snowman Logistics, India's largest cold storage company in Taloja, on the outskirts of Mumbai, India, Saturday, Oct. 17, 2020. The vaccine cold chain hurdle is just the latest disparity of the pandemic weighted against the poor, who more often live and work in crowded conditions that allow the virus to spread, have little access to medical oxygen vital to COVID-19 treatment, and whose health systems lack labs, supplies or technicians to carry out large-scale testing. (AP Photo/Rajanish Kakade)

LONDON (AP) — The number of confirmed COVID-19 cases across the planet has surpassed 40 million, but experts say that is only the tip of the iceberg when it comes to the true impact of the pandemic that has upended life and work around the world.

The milestone was hit Monday morning, according to Johns Hopkins University, which collates reports from around the world.

The actual worldwide tally of COVID-19 cases is likely to be far higher, as testing has been uneven or limited, many people have had no symptoms and some governments have concealed the true number of cases.

To date, more than 1.1 million confirmed virus deaths have been reported, although experts also believe that number is an undercount.

The US, India and Brazil are reporting by far the highest numbers of cases — 8.1 million, 7.5 million and 5.2 million respectively — although the global increase in recent weeks has been driven by a surge in Europe, which has seen over 240,000 confirmed virus deaths in the pandemic so far.

In the US, some states are trying more targeted measures as cases continue to rise across the country. New York’s new round of virus shutdowns zeroes in on individual neighbourhoods, closing schools and businesses in hot spots measuring just a couple of square miles.

As of last week, new cases per day were on the rise in 44 US states, with many of the biggest surges in the Midwest and Great Plains, where resistance to wearing masks and taking other precautions has been running high and the virus has often been seen as just a big-city problem. Deaths per day were climbing in 30 states.

Dr Anthony Fauci, the US government’s top infectious-disease expert, said Americans should think hard about whether to hold Thanksgiving gatherings next month.

The World Health Organization said last week that Europe had a reported a record weekly high of nearly 700,000 cases and said the region was responsible for about a third of cases globally.

Britain, France, Russia and Spain account for about half of all new cases in the region, and countries like Belgium and the Czech Republic are facing more intense outbreaks now than they did in the spring.