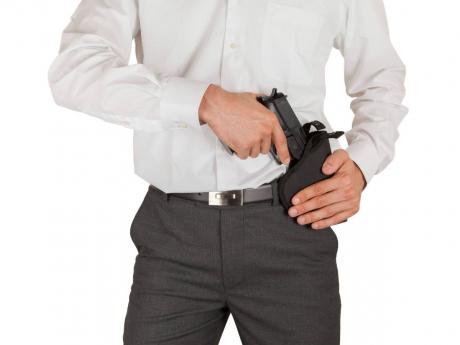 The driver of the Honda vehicle seen on video showing a gun to another road user says he only pulled his licensed firearm as he believed he was in danger.

Seymour Branford, a businessman, has issued a statement to the Firearm Licensing Authority (FLA), a copy of which was obtained by THE WEEKEND STAR.

Branford said that he and his family were travelling along Hope Road last Saturday when, on reaching the vicinity of the Waterfalls Entertainment venue, he observed a white motor car which was heavily tinted tailgating his vehicle in what he considered "a menacing manner". Branford said the motor car almost collided into his CR-V, causing him to swerve, resulting in his vehicle climbing the embankment.

"I managed to regain control of my vehicle quickly while still observing the same white motor car with the black tints driving up beside me and trying to block my path," he said.

Branford said that he immediately became very fearful for his safety and that of his family "because I saw the window of the white motor car wind down a little and then wind back up immediately".

"I could not see who was inside the vehicle and as I tried to manoeuvre (sic) my vehicle from the area, I saw the vehicle drive across the road into my path as if it was trying to force my vehicle off the road," he said.

Branford said that along that particular section of the roadway, motorists have been forced to stop their vehicles in similar circumstances and ended up being robbed and killed. He stated that "honestly believing I was under attack, I pulled my firearm from my waist with it still secured inside the Holster (sic)".

"I saw the window of the white heavily-tinted car wind down a little, then heard a voice shouting out "P***y a shoot mi fi shoot you," Branford said. He said his spouse started to panic, and he felt that the other driver had intended to do him harm. Branford said he then raised the firearm, still in its holster, to his window.

"I did not remove the firearm from the holster (sic) as I could not see who was inside the white car and my driver-side window was still wound up with the white tinted car beside me with its windows up as well," he said. Branford said that when the other car's passenger window came down, "I saw that there was a woman driving the white car, and a young child was sitting in the front passenger seat of the car".

"The woman who was the driver of the white car began hurling several loud expletives at me. I realized (sic) that the occupants of this vehicle were no threat to me at this point, so I lowered my firearm, rolled up my windows and tried to drive away from her as best as I could, despite the traffic," he said.

"At no point during the incident did I use my firearm in a manner to intimidate anyone. On March 2, 2021, I spoke to my attorney about the incident, after which I attended the Firearm Licensing Authority to report the incident." The FLA said it is investigating the matter.