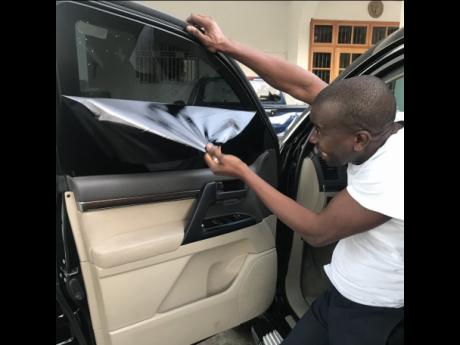 Ex-Senator Jean Renel Senatus taking the tint off his car’s window after the Haitian government announced they will start prohibiting the use of vehicles with tinted windows. (Jean Renel Senatus’s Twitter Image)

Port-Au-Prince, Haiti (CMC) – Authorities in Haiti have announced a ban on tinted vehicle windows in a move to stop kidnappings.

The ban, which the government said is temporary, although it did not state how long it would last, takes effect on Saturday.

It will apply to most vehicles, including police vehicles.

The only exception will be vehicles bearing the new “Official, Diplomatic Corps and Consular Corps” registration plate.

“This measure applies from Saturday, March 6, 2021. After this period, the police services are authorised to use the legal constraints provided for in the Highway Code and criminal law,” a statement from the Haitian government said.

“The situation calls for exceptional measures for the safety of all, and requires the understanding of the population and of all those who had already paid their tinting rights.”

A hotline was also provided for residents to report vehicles with tinted windows as well as those without licence plates.

Kidnappings for ransom have surged in Haiti in recent times, with perpetrators using heavily tinted vehicles in the execution of their crimes.

There have been more than 110 kidnappings so far this year alone – more than double the 51 reported kidnapped during the first three months of 2020.