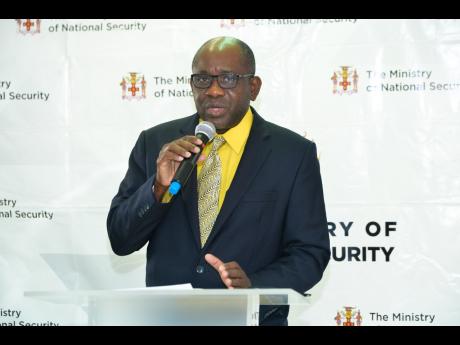 Chairman of the National Taskforce Against Trafficking in Persons (NATFATIP) and Permanent Secretary in the Ministry of National Security, Courtney Williams.

Chairman of the National Taskforce Against Trafficking in Persons (NATFATIP), Courtney Williams, says more than 100 victims of human trafficking have been rescued in Jamaica over the last decade.

Williams who is also Permanent Secretary in the Ministry of National Security, under which the NATFATIP now falls, said with an average of 10 persons being reportedly trafficked in Jamaica per year, it is important to have robust laws and policies that tackle trafficking in persons.

He further noted that the establishment of the NATFATIP in Jamaica in 2005 underscores the importance the government places on human trafficking.

This effort was later bolstered by the formation of the Office of the National Rapporteur on Trafficking in Persons in 2007, which is an independent observer of Jamaica’s efforts against human trafficking.

“In 2007 the Government enacted the Trafficking in Persons Act and there have been subsequent amendments. In 2013, one of the amendments to the TIP Act was increasing the maximum term of imprisonment from 10 years to 20 years for persons guilty of human trafficking” he explained.

The Chairman further pointed out that there are other significant pieces of legislation that may be used to prosecute traffickers such as the Child Care and Protection Act, the Offences against the Person Act and in instances where profiteering is observed, the Proceeds of Crime Act.

Meanwhile, Manager for the Trafficking in Persons Secretariat Chenee Russell-Robinson, said the United Nations’ Palermo Protocol to prevent, suppress and punish trafficking in persons, was established in 2000 and ratified by Jamaica in 2004.

Human trafficking is described as a form of modern-day slavery.

It is the recruitment, transportation, transfer, harbouring or receipt of persons by means of force, abduction, fraud, or coercion for an improper purpose, including forced labour or sexual exploitation.

It is recognised as one of the most organised, heinous and lucrative crimes globally.

Citing a 2016 International Labour Organisation report on Trafficking in Persons, Williams said there are about 40 million people being trafficked globally, of which 80 per cent are being trafficked for sexual exploitation.