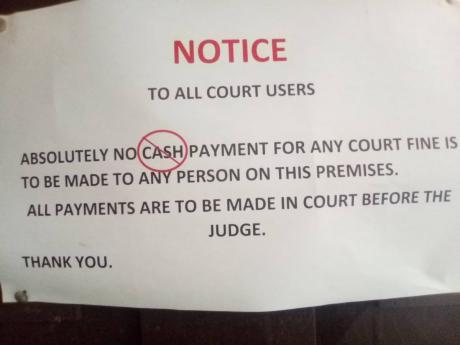 A notice posted on a courtroom door, which urges persons not to fall prey to a scam that has been taking place in the courtyard of the St Catherine Parish Court.

Despite a sign posted at the St Catherine Parish Court warning that persons should not make payments to anyone except court staff, criminals are still enjoying the time of their lives as people continue to fall victim to their scam.

The men target persons who are on bail and have returned to court hoping to pay a fine. One victim, Shericka, told THE STAR that she was outside the courthouse recently, when she was approached by a well-dressed man.

"Him tell me seh that him can help mi out of the crowd as he was employed at the court's office. Him then collect mi bail bond and seh mi fi give him $8,000 as the court money," Shericka said. After handing over her money and bail bond to the man, Shericka said that she watched him walk towards the court's office building. She then heard her name being called for her to go before the judge and answer to her charge. It was then that she realised that she had been tricked.

"Is a lucky thing mi have a little extra as mi plead guilty and the judge fined mi $5,000 or 30 days' imprisonment," she said.

THE STAR has been informed that on several occasions, persons, especially from rural Jamaica, have fallen victim to fraudsters who flock Emancipation Square near the courthouse. Yesterday, a woman appeared before Parish Judge Opal Smith on a charge of failure to wear a mask in public. A policeman told the court that he received a report from the accused that she paid a man $8,000 and surrendered her bail bond. The judge fined the woman for breaching the Disaster Risk Management Act.

Meanwhile, Deputy Superintendent Linroy Edwards, head of operations in the St Catherine North Police Division, said the police are aware of the issue.

"The police have held persons there for these offences before, however, there was no conviction as the witnesses fail to attend court. Nonetheless, we are putting in motion methods to deal with the issue," Edwards said.