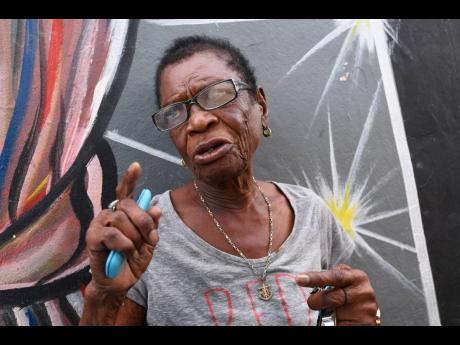 Monica Spraggs, grandmother of six-year-old T-Mora McCallum, who was shot and killed on Text Lane, Central Kingston, on Monday evening. 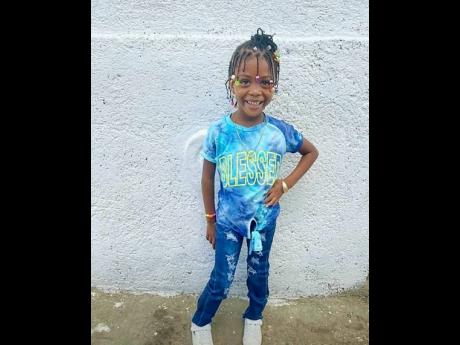 Six year-old T-Mora McCallum loved the 'Dirt Bounce' dance and during her free time, she, her cousins and little friends would show off their versions of it, much to the amusement of the grown-ups.

For her seventh birthday, on December 27, the St Aloysius Primary School student told her playmates that she would be having a party and was counting down to the event.

But the bubbly girl will never celebrate her special day with her loved ones. T-Mora took her last breath face down in her own blood on Monday afternoon, seconds after she was shot by a man who residents said was cleaning a gun on Text Lane in central Kingston.

According to Dennis Brooks, senior communications strategist for the Jamaica Constabulary Force, about 4 p.m. a 55-year-old man was making repairs to an illegal firearm when it went off and struck the youngster in the back.

"She ran from the yard that she was in and collapsed and died. The man initially escaped from the area, but he returned later in the evening and was set upon by residents, and he was beaten and chopped. He was taken to a nearby facility, where he remains under police guard and in police custody," Brooks said. He said that the man is yet to the charged or questioned officially.

When THE STAR visited Text Lane yesterday, T-Mora's loved ones, including her schoolmates, wore grim expressions. A relative said the children were extremely traumatised as they had witnessed their 'little friend' die.

"They all heard when she screamed and saw when she ran out and fell on her face. Them feel it, man. We are all mourning, we just can't believe she gone like that. Yesterday (Monday) she came home from school and she told her father that she mash up her test dem, and she was going to mash up the rest today (yesterday), and 'Tim Tim' just dead suh," the relative said.

The woman stated that T-Mora resided in the Waltham area with her parents, who operated a shop on Text Lane.

"Her parents are distraught. Her mother is pregnant now and as expected, she is not taking it easy. It rough. See her uncle dem and her grandmother dem deh, from last night nobody nuh sleep or eat anything much," she said. The residents said the suspect is someone known to the family.

"All a wi know him as a mason, but is like him know everything about gun. Him is a big man. When he was doing whatever to the gun, mi wah know if him never see di little girl. Jah know, is him granddaughter run out and bawl out say 'Mi grandfather shoot Tim Tim.' Poor baby just dead suh," a woman said.