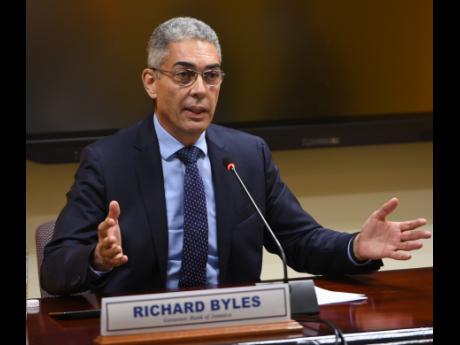 Jamaica’s foreign exchange market has remained relatively stable since the start of the year.

Bank of Jamaica (BOJ) Governor, Richard Byles, says this partly reflects actions taken by the BOJ, through its Monetary Policy Committee (MPC), in response to the higher than targeted inflation out-turn.

The Statistical Institute of Jamaica (STATIN) reports that inflation for the 12-month period, ending April 2022, was 11.8 per cent.

Speaking during the BOJ’s digital quarterly media briefing, on Tuesday (May 24), Mr. Byles said the MPC, which met earlier this month, voted to increase the policy rate by a further 50 basis points, to five per cent, effective May 20, 2022.

“This current decision has resulted in a cumulative increase in the policy rate of 450 basis points since October 2021 and has taken [it] close to the level that the Committee considers appropriate,” the Governor further indicated.

“Complementing these policy rate increases, the Bank sold approximately US$552 million to the foreign exchange market since October 2021, more than twice the amount… compared with the previous corresponding period. In addition, the Bank adjusted the net open position limits for deposit-taking institutions (DTIs),” he noted.

The Governor said these actions contributed to the maintenance of stability in the exchange rate since the start of November 2021 and have been critical in preventing a further rise in inflation.

“Notwithstanding these actions, May 17, 2022, Jamaica’s gross international reserves remained substantial, amounting to approximately US$4.3 billion. The Bank projects that the gross reserves will continue to remain adequate in the medium term. The MPC noted that the Bank’s strong international reserves reinforce its ability to support the foreign exchange market, as needed,” Mr. Byles further stated.

He said the Bank’s current decision is based on its forecast for further increases in inflation over the next two months, before it begins to decline.

“This forecast is, however, conditional on our assumption that tensions between Russia and Ukraine do not escalate and inflation among Jamaica’s trading partners fall,” the Governor noted.

“In turn, these measures will help to reduce the demand for foreign currency, leading to continued stability in the exchange rate, and will reduce demand in the economy, limiting the ability of businesses to pass on price increases to consumers,” Mr. Byles added.

Meanwhile, the Governor advised that DTIs’ balance sheets have remained adequately capitalised and in compliance with prudent liquidity standards.

“At the same time, non-performing loans remain well below our threshold for concern and continue to be fully provided for by the DTIs. All these indicators highlight the general stability in the financial system,” he pointed out.

Mr. Byles also indicated that private-sector credit provided by DTIs has been growing, albeit at a relatively slow pace.

This, he pointed out, reflects the lagged effect of the pandemic on demand, particularly from businesses.

“I wish to reaffirm Bank of Jamaica’s commitment to using all the tools within its powers to fulfil its mandate of price stability, including making Jamaican dollar assets more attractive, keeping a tight lid on liquidity, and maintaining stability in the foreign exchange market. The Bank will continue to closely monitor the global and domestic economic environment and base future policy decisions on incoming data,” he assured.