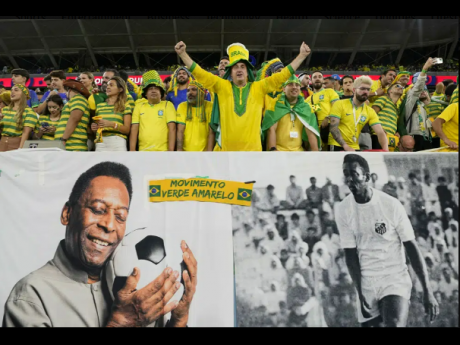 Brazil supporters cheer on the stands above a banner with pictures of soccer legend Pele, while waiting for the start of the World Cup round of 16 soccer match between Brazil and South Korea, at the Education City Stadium in Al Rayyan, Qatar, Monday, Dec. 5, 2022. (AP Photo/Martin Meissner)

DOHA, Qatar (AP) — The image of a young Pelé celebrating goals and lifting trophies with Brazil’s national team appeared brightly on the shirts, flags and banners of Brazilian fans gathering before the Seleçao’s World Cup match against South Korea on Monday.

The 82-year-old Pelé remained in a hospital in Sao Paulo recovering from a respiratory infection that was aggravated by COVID-19, and said he would watch the match on television.

“I’ll be watching the game from hospital and I’ll be rooting for each one of you,” he wrote on Twitter. “Good luck!”

In the 10th minute of each half, Brazilian fans opened a large banner with his image behind one of the goals at Stadium 974, a reference to the No. 10 jersey that he used to wear, and chanted his name. In the image, Pelé was shown with the white No. 10 shirt that he wore while playing for Brazilian club Santos.

After Brazil’s 4-1 victory, Neymar carried a banner with the soccer great’s image and “Pelé” written on it. The entire team then posed behind it near midfield.

The news coming from Brazil early Monday was good. Two daughters and one grandson of the soccer great said he was not under an imminent risk of death.

It was reason for celebration for the many Brazilians who have been cheering for the Selecao and showing their support to Pelé in Qatar.

“We are all happy to hear that he is getting better,” 35-year-old Brazil fan Raphael Bissonho said. “He’s the King of Football, our biggest symbol in soccer. He represents Brazil as best as anyone. Let’s hope that soon he is out of the hospital and showing us a photo of him watching the national team on the television.”

Pelé had a colon tumour removed last year, but neither his family nor the hospital have said whether it had spread.

A few thousand people were at the Brazilian fans’ gathering point in Doha on Monday to cheer for the team in the match against South Korea in the round of 16. Many headed to Stadium 974 to watch the game.

“Everyone is thinking and talking about him,” said 44-year-old Alexandre Carola, a Santos fan who travelled from Sao Paulo to watch Brazil play. “We are here, praying and hoping that he can recover as soon as possible. And I’m sure that when he watches the match on TV and sees this movement to wish him well, to send him this energy, I’m sure that it will give him more strength to get better and soon return home to his family and friends.”

There also was a show of support before the game against Cameroon last week, after news came out that Pelé had been hospitalised.

There were tributes to Pelé put together by tournament organisers in Qatar, as well, including messages of support displayed on building facades. During a drone show at Doha bay, a large Brazilian flag with the No. 10 on it was displayed, along with the message “Get well soon, Pelé.”

Pelé holds the record for goals in officials matches with Brazil with 77, one more than Neymar, who scored in the first half against South Korea after returning from a right ankle injury.