My Elle Belle to rebound 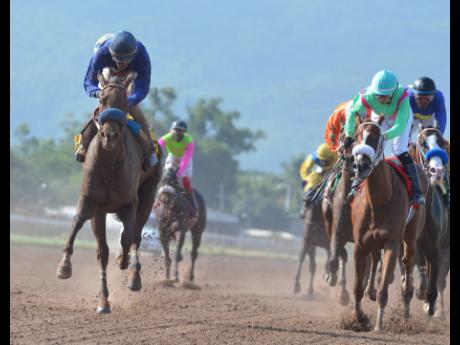 MY ELLE BELLE (left), with Anthony Thomas aboard, wins the eighth race at Caymanas Park on June 16.

MY ELLE BELLE lost absolutely no mark in defeat against her fellow United States-bred HILLY'S HALO, who has improved into a grade one horse within the space of a month.

Finishing six and a half lengths behind HILLY'S HALO, a four-length winner over MY SISTER at six and a half furlongs, MY ELLE BELLE needed far more real estate, as her previous races have shown, for her to be effective.

Now stretched out at eight and a half, running at 117lb with leading rider Anthony Thomas, the three-year-old chestnut filly's thundering finish should once again prove too strong for SUPER SPARKLE, who she had beaten at seven and a half furlongs in March to register her first win.

SUPER SPARKLE, also an American, has worked really well, six furlongs in 1:14.0 last Sunday morning, and will try stealing the race from in front. Trainer Ian Parsard's intentions are as clear as day, removing the blinkers he fitted on June 16 to sharpen her when collaring DEE DANGER at five and a half.

However, SUPER SPARKLE has exhibited stamina limitations of her own, caught while trying to make all in three races before that victory, the farthest being at seven and a half when beaten by MY ELLE BELLE at level weights.

MY ELLE BELLE is actually a non-winner-of-three, racing two pounds lighter against SUPER SPARKLE, who won her maiden race on June 16, the same day Chung's runner won her second, beating HONEY RYDA and MY SUGARMAN at a mile in 1:40.4.

Meanwhile, the season's third two-year-old race sees the debut of trainer Wayne DaCosta's PRINCESS ANNIE, a half-sister to FUTURE KING, who had won the 2016 Guineas and lost the Jamaica Derby in the stewards room in a historic double disqualification, which saw him being placed third behind ORPHEUS and BIGDADDYKOOL.

PRINCESS ANNIE has looked decent enough at exercise, her best being 1:03.3 from the gate, easy, out straight, the first half-mile in 47.2, beating TOP SHELF, who will also line up in the Front Runner Dash at five furlongs round.