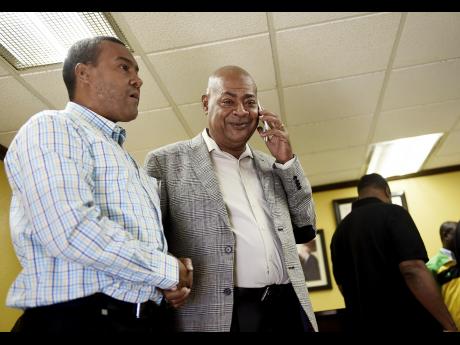 Today, members of the Kingston and St Andrew Football Association (KSAFA) will make a final decision on whether they will take part in the reformed Jamaica Football Federation (JFF) method of qualifying for the Red Stripe Premier League.

KSAFA and the JFF have been at a deadlock for the past three years over the new promotion format which will group the Corporate Area football association with the St Catherine and St Thomas football associations to play for one of the four spots in the JFF/Magnum playoff series to qualify for the nation's top flight.

The competition, which will see four teams from each of the associations play in a round-robin format to decide the top team, is slated to begin on December 8, and today's decision could have huge implications on its structure.

"After the meeting, a lot will be revealed," president of KSAFA, Wayne Shaw told STAR Sports.

In 2014, there was an agreement between the JFF and the four confederations to change the method by which teams are promoted to the nation's top-flight league.

As it stands now, winners of each of the four confederations qualify for the JFF/Magnum play-off series. However, the new method would zone parishes into four groups and the winners would earn a spot in the play-off series, where the top two teams will be promoted to the RSPL.

But KSAFA opposes this new method saying it is a strategic move to reduce their dominance in local football.

As such, they have decided to boycott the competition.

However, it is reported that some clubs within the Association are willing to take part in the new format but were threatened by the hierarchy of KSAFA that they will be banned if they do so.

"We have not threatened anyone," he said. "The last time we met, which was about two weeks ago, all of the clubs agreed not to participate but tomorrow we will know."

President of the JFF, Michael Ricketts, has sought to used various methods to break the deadlock but, to no avail.

He said that he met with the board of directors of the federation to come to some amicable agreement but was told that they could be setting a bad precedent if the federation gives in to the wishes of KSAFA.

He also stated that he arranged a meeting with the clubs themselves as he felt the JFF message wasn't being communicated to them verbatim. "I was told that there could be repercussions for the clubs, so we decided not to have the meeting," he said.

"I don't want a standoff between the JFF and KSAFA."