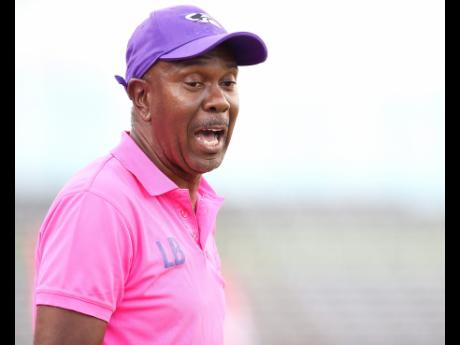 Up until Nathan Thomas scored Kingston College's (KC) winning goal in added time in the ISSA/Digicel Manning Cup final last Friday, it was widely believed that his coach Ludlow Bernard's job was on the line.

Bernard, a KC old boy, took over the Manning Cup programme of the 'Purples' three seasons ago and led them to the semi-finals on all three occasions.

Still, many observers and critics felt that this represented an underachievement, given the quality of the squads at his disposal, and raised questions about his job safety in the event the title wasn't delivered this season.

However, KC principal Dave Myrie was quick to underline his confidence in the tactician, who was winning his first Manning cup title.

"Those who were talking about firing weren't involved in hiring Ludlow Bernard. I was, so they can't be involved in firing Bernard and the panel that interviewed him and had him there, we have never said anything about getting rid of him," Myrie said during the school's celebrations on Monday.

"I am the principal of KC, and nobody can't push me to make decisions that I don't want to make. I report to a board of management, and so it doesn't matter what is said outside. I will make the decision I think is appropriate for KC."

Bernard, despite winning two Walker Cup titles at Wolmer's and another at KC, in addition to last year's Champions Cup success, has never quite received the widespread respect given to some of his peers.

With former Jamaica College coach Miguel Coley getting the better of the KC man in 2016 and 2017 and many expecting St George's coach Neville Bell to outwit him last Friday, Bernard, for his part, was quick to underline his record against the pair of five-time Manning Cup-winning coaches.

"Respect to Miguel Coley, but it's 3-2 in my favour. Respect to Neville Bell, but it's 7-4 in my favour. I say no more," said Bernard in reference to his head-to-head record against the two highly respected coaches.