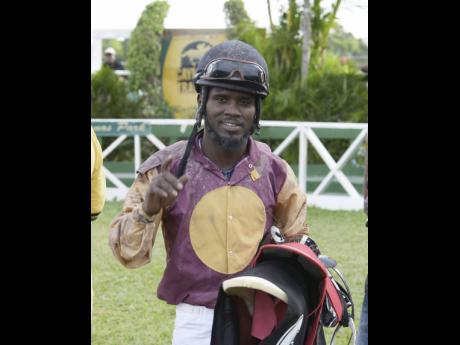 BE careful not to go out on limbs in the respective divisions of Saturday's John Clifton Wright Memorial Cup for three-year-old maiden fillies, starting at the first event, which has 10 starters, including four first-timers, with others out for their second and third starts.

The divided feature is a six-furlong sprint in which three of the four first-timers have shown adequate ability at exercise to suggest any could take the event, depending on how forward they arem and, of course, their temperament on debut.

BLACK RIVER, PRINCESS LAUREN and SPLENDID VISION each have first-call riders, Simon Husbands, Dane Dawkins and Robert Halledeen, suggesting that their respective connections are dead serious about getting off the mark the first time of asking.

Husbands' mount, BLACK RIVER, galloped five and a half furlongs in 1:08.4 two Sundays ago and 1:02.0 for five furlongs round, two Saturdays prior. Note how trainer Lance Richards brought her back last Sunday for an easy half-mile in 51.3 after getting in the real work in January.

BLACK RIVER is no bred-in-the-purple but, her full brother, MR PANTHEON, is now at overnight allowance level, having won decent races.

On the other hand, PRINCESS LAUREN has no sibling with which to compare her. However, her half-sister, a bay filly by Adore The Gold, was bought for $3.3 million by champion trainer Wayne DaCosta for 2017 champion owner, Carlton Watson, at November's Yearling Sale.

Being trained by Gary Subratie, don't expect to see anything faster than the 48.4 for a half-mile last Sunday morning. However, PRINCESS LAUREN was sired by Soul Warrior, the father of last year's 1000 Guineas winner, DISABILITY CHARM, and this year's derby winter-book favourite, SUPREME SOUL.

SPLENDID VISION has no sibling of note, being a half-sister to BOSS IZZY and HERECOMESTHEBOSS. However, she's by Fearless Vision, a classic throwing sire and father of December's Jamaica Two-Year-Old Stakes winner, RUN THATCHER RUN, out of the mare, Intensified, who has excellent pedigree on her bottom line, winners of multiple races - Intentional, Royal Gator, Neftenga and Phareal.

Of the four first-timers, no surprises here, Nunes' SPLENDID VISION has shown most at exercise, five and a half furlongs in 1:07.4 on Sunday, the last five in 1:01.4. However, it's a six-furlong race and the last five wasn't too convincing, raising questions of whether Nunes' runner can get clear enough to last home.

Division two of the John Clifton Wright Memorial Cup, the fourth event, is also to be approached with caution. REGGAEGONEGRAMMY finished third behind ENEDINA and Philip Feanny's CRYPTOCURRENCY on December 22 and returns with every chance.

CRYPTOCURRENCY reports fitted with a visor, which she wore when cantering on Thursday, replacing blinkers from her last two outings in which she placed second, back-to-back races, beaten by ENEDINA and SPECIAL COUNSEL.

Rowan Mathie has taken first-timer KIAH, a Taqrub-Princess Akeem offspring, to task at exercise, 1:17.4 for six furlongs last Saturday morning. Alford Brown's CASE CLOSED clocked 1:01.3 from the gate on January 19 and returned to post 1:01.2 on the round a week later, the best at the distance that morning, and has Trevor Simpson aboard.

A third first-timer, Ian Parsard's SUPER STUNNER, apparently an in-utero, reports well trained and clocked 1:01.4 from the gate, out the mile chute, on January 17, prior to her 1:03.0 on the round course Sunday morning.