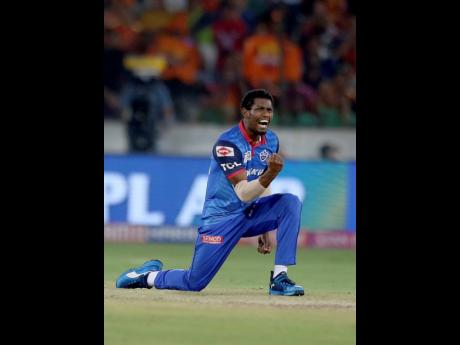 Keemo Paul produced a sensational spell of fast bowling to spur the Delhi Capitals to a spectacular 39-run victory over the Sunrisers Hyderabad.

Paul grabbed three wickets for 17 runs from his four overs to help trigger a dramatic collapse as Hyderabad were dismissed for 116 in pursuit of the Capitals' total of 155 for seven from their 20 overs.

Led by a half-century opening stand between David Warner and Jonny Bairstow, Hyderabad seemed to be cruising at 72 without loss inside of ten overs.

But once Paul, who was voted Man-of-the-Match, accounted for Bairstow's scalp, it all went downhill for Hyderabad.

He followed that up by dismissing captain Kane Williamson for three and then Ricky Bhui for seven, to leave the score 101 for three.

From thereon, Kagiso Rabada ran through the middle order claiming four scalps, including the prized wicket of Warner for the top score of 51, as Hyderabad lost their remaining seven wickets for just 15 runs.

So embarrassing were Hyderabad's batters that only Bhui made more than the five extras which were conceded by the Capitals.

In another match, both Sunil Narine and Andre Russell failed with the bat as the Kolkata Knight Riders (KKR) went down by five wickets to the Chennai Super Kings.

Opening the batting, Narine made just two from seven balls, while Russell hit two boundaries in his knock of 10 as KKR could only muster 161 for eight in their 20 overs.

Chennai then got up to 162 for five with two balls to spare, thanks hugely to an unbeaten 58 from Suresh Raina and 31 not out from Ravindra Jadeja.

Narine did manage to claim two wickets for 19 runs from his four overs, while Russell's solitary over went for 16 runs.