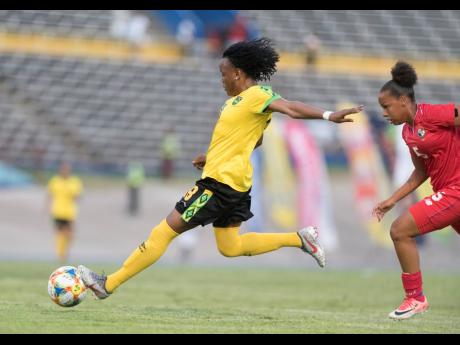 Jamaica’s Trudi Carter (left) drives a hard shot at goal ahead of Panama defender Katherine Castillo during their international friendly match at the National Stadium on Sunday.

National midfielder Trudi Carter says that she has been working assiduously to be fully fit in time for next month's FIFA Women's World Cup tournament in France.

The 23-year-old Carter, who is coming off a knee injury, played her first match in seven months for the Reggae Girlz against Panama on Sunday at the National Stadium. The Jamaicans won the match 3-1.

Carter, who represents AS Roma in the Italian league, played 60 minutes against Panama and missed a couple of clear-cut chances for the Reggae Girlz.

However, she told STAR Sports that it felt great to be back on the field because it was a very tough recovery process for her in the last seven months.

"I am feeling great because I got my first minutes back from injury against Panama, and the last time I played for the national team was in October last year. So it was actually nice to be back out there with the girls," Carter said.

"I am over the injury now, but I am kind of still not sharp in areas that I want to be sharp in. As you can see, I got chances against Panama and I didn't finish them, so I am still rusty, but, hopefully, in another two weeks' time, I will be back to where I normally used to be."

She said that her confidence level took a hit after she suffered the injury because she was unsure if she was going to be selected for the World Cup.

"While I was injured, sometimes I thought that I wasn't going to make the team, and I also didn't know what to expect, but now, I am just thankful that I made the 23-man squad going to France," said Carter.

She said that as the playmaker of the team, she will have a very important role to play if the Reggae Girlz are to advance from the group stages of the competition.

"My role will be crucial because I am a playmaker, so I will be looking for the forwards or whoever is upfront to dish the ball to," she said. "I feel great, and I am feeling confident, and if we just play the way we know to play going into the World Cup, then I know that we will come out victorious in these matches," she said.