Durant to miss Game One of NBA Finals 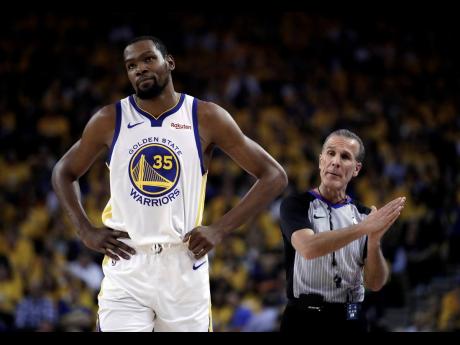 Kevin Durant won't be ready to play in time for Game 1 of the NBA Finals on May 30.

The two-time reigning finals MVP has yet to return to on-court work while recovering from a strained right calf.

Big man DeMarcus Cousins might be healthy for Golden State's series opener against either Milwaukee or Toronto.

"Potentially," coach Steve Kerr said yesterday, "but it's up in the air."

The team re-evaluated both players yesterday and they are expected to be ready at some point during Golden State's fifth straight finals.

Durant is making progress in the training room and with moves he is able to handle in the weight room, Kerr said.

"We've known all along, it's how he responds. There's never been a point during this process where we've been able to say, 'he's going to play on such and such date,' and there still isn't, so we just keep going, keep moving forward," Kerr said. "... But again, he hasn't spent any time on the court with us, hasn't gone through an individual shooting workout."