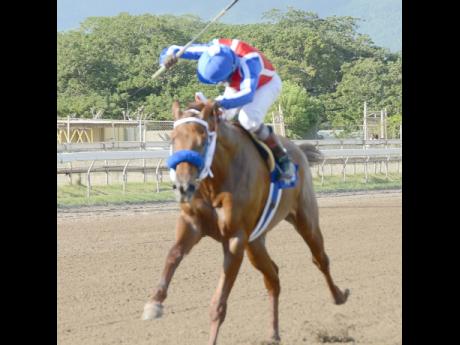 ANTHONY NUNES' Guineas winner SUPREME SOUL and his stablemate, EARN YOUR STRIPES, should have things their way in the Governor's Cup, especially with the absence of Jamaica Two-Year-Old Stakes winner RUN THATCHER RUN.

Hunting a fourth Governor's Cup title, Nunes has three runners in the nine-horse field, the plodder TRICKY ONE rounding out his hand. In the absence of RUN THATCHER RUN, Wayne DaCosta has thrown PRINCESS ANNIE to the lions, a 'why not?', considering she won the Oaks at 10 furlongs, but, oops, she has all of 121lb, five less than SUPREME SOUL, the only filly in the race and second-heaviest in the line-up.

The other classic-placed horse in the event is Gary Subratie's SENTIENT, who basically ran one-paced throughout the Guineas, finishing two-and-a-half lengths third behind stablemates SUPREME SOUL and TOONA CILIATA. Considering Richard Azan's DUKE was only a quarter-length behind SENTIENT, his fourth-place finish makes him just as good.

PRINCESS ANNIE's proximity to SUPREME SOUL in the handicaps tells the tale of her chances, especially after her final time of 2:13.2 in the Oaks. That leaves the matter of whether the others, most in receipt of 16lb from SUPREME SOUL, can benefit from the handicaps to turn the tables after sitting level and being outclassed in the Guineas.

Whereas the Governor's Cup has been dubbed 'the poor man's derby', suggesting horses from smaller barns should pop up to beat their classic-placed and heavier rivals, due to the weight conditions of the event, a glance at the past winners points mainly in the opposite direction.

Despite the weight, SUPREME SOUL has class, being a half-brother to 2016 winner BIGDADDYKOOL, who, up to now, remains one of the country's top distance horses at age six. Receiving nine pounds from SUPREME SOUL might seem a huge weight swing in EARN YOUR STRIPES' favour, but his pedigree hangs over his head like the sword of Damocles, Nuclear Wayne-Brown Sugar, ready to snap after a mile.

EARN YOUR STRIPE's flashy exercise reports, beating SUPREME SOUL in the mornings, should surprise no one after doing exactly the same thing heading into the Guineas, which his stablemate won with relative ease.

It could be argued that with no RUN THATCHER RUN around, EARN YOUR STRIPES will be more relaxed and could find an extra gear with the light weight when challenged. However, Nunes retaining the blinkers for a 10-furlong race makes that very doubtful and could even cost him the exacta.